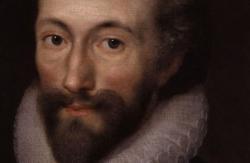 'Pleasure is none, if not diver'... More

No man is an island, and Never send to know for whom the bell tolls; it tolls for thee. These lines written by John Donne in the 17th century remain true for all time.


John Donne was born on Bread Street in London in 1572. His early years were difficult: his family were Catholics at a time when this was practically a treasonable offence; then his father died in 1576 followed by his mother in 1577 and two of his sisters in 1581. Nevertheless Donne was able to study at Hart Hall, Oxford from the age of 11 and then at Cambridge University for another three years. He was, however, unable to obtain a degree because of his Catholicism.

Aged 19 Donne returned to London to study law but was soon off to fight in the ongoing wars between England and Spain. He intended to pursue a diplomatic career but his marriage to Anne Moore in 1601 and the displeasure it caused his patron resulted in a spell in gaol and a considerable loss of income. Of this he was to write pithily: John Donne, Anne Donne, Un-done. His marriage, however, was stable in spite of financial struggles and produced 12 children of whom seven survived. Following his wifes death in 1615 Donne did not remarry.

Donne is remembered for his metaphysical poetry, written throughout his life although most of his work was published posthumously. His early poems dwelt on the theme of love while his later works were darker and more religiously inspired. He also wrote many sermons and delivered them from the pulpit when he became an Anglican priest in 1615 having become disenchanted with Catholicism. Later, he was chaplain to Charles I and, in 1621, head of St Paul's Cathedral in London, where he was buried after his death on March 31, 1631.

Contributors: Do you have a site related to John Donne?
Supply some content for this page and we will gladly add a link to your site. Email here.