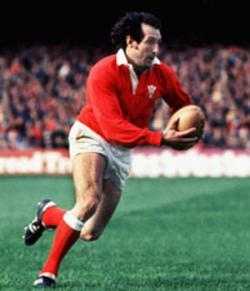 Born in Pontardawe, South Wales
Born on 12th of July 1947

He made his debut for Cardiff RFC in September 1966 and won his first international cap for Wales on 1 April 1967, becoming Wales youngest captain in 1968. He retired in 1978 after the Five Nations Championship and now commentates. He is accredited as being Wales' greatest ever player and to this point has a statue in St. David's Centre, Cardiff.

Contributors: Do you have a site related to Gareth Edwards?
Supply some content for this page and we will gladly add a link to your site. Email here.