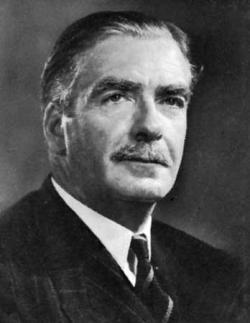 'Corruption never has been comp'... More

Spent the First World War in the British Army, receiving the Military Cross. He was elected a Conservative MP 1923, and served as foreign secretary for three periods including during World War II. He served loyally as Winston Churchills lieutenant, and even married Churchills niece, Clarissa Spencer-Churchill in 1952. Made Knight of the Garter in 1954, succeeded Winston Churchill as leader of Conservative party, and was Prime Minister from 1955-1957.

Links:
http://news.bbc.co.uk/2/hi/middle_east/5199392.stm BBC take on the Suez Crisis that so defined Edens Premiership

Contributors: Do you have a site related to Anthony Eden?
Supply some content for this page and we will gladly add a link to your site. Email here.