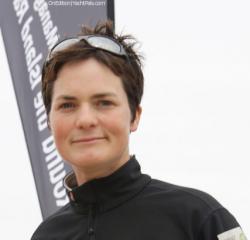 Born in Matlock, Derbyshire
Born on 8th of July 1976

Ellen Patricia MacArthur was born 8th July 1976. She is best known as the diminutive solo long-distance yachtswoman who broke the world record for the fastest solo circumnavigation of the globe on 7th February 2005. Her record has since been broken again in early 2008, but she remains the fastest female and youngest sailor to race around the world solo, non-stop. She comes from Whatstandwell in land-locked Derbyshire, but is now based in Cowes on the Isle of Wight. MacArthur's interest in sailing came from reading 'Swallows and Amazons' by Arthur Ransome, and she is now the patron of the Nancy Blackett Trust which owns and operates Ransome's yacht, 'Nancy Blackett'. Her first experience of sailing was aged 4, on a boat owned by her aunt on the east coast of England. At the age of 8 she started saving her school dinner money in order to buy her first boat. Aged 13 she acquired 'Threpenny Bit', an 8ft dinghy. Aged 15, she got 'Kestrel' a small keelboat, and aged 17 she got her third boat, a 21-foot Corribee, 'Iduna'. In 1994 she made her debut into full-time yachting, working on an open 60ft yacht and teaching sailing to adults at the David King Nautical School in Hull. She achieved the RYA Yachtmaster and Instructor's ticket at the exceptionally young age of 18. In 1995 she won the BT/YJA Young Sailor of the Year Award and sailed 'Iduna' single-handed around Great Britain. On her 20th birthday in 1996, she made her first transatlantic passage leaving Newport, Rhode Island. The same year she came third in her first transatlantic race, the Quebec to St. Malo. In 1998 she acquired sponsorship from Kingfisher plc and came first in the Route du Rhum solo transatlantic race from St. Malo to Guadeloupe on her open 50ft monohull, 'Kingfisher'. In June 2000, MacArthur set the monohull east to west passage world record when she sailed Kingfisher from Plymouth to Rhode Island in the USA in 14 days, 23 hours and 11 minutes, single-handed. She really came to prominence in 2001 when she came second in the VendÈe Globe solo round-the-world sailing race in 'Kingfisher', the fastest female and youngest sailor to race solo, non-stop, around the world, and was subsequently awarded an MBE for services to sport. A trimaran named B&Q/Castorama was specially designed and built for her in Australia in 2004, principally for her to break solo records in. She began her attempt to break the solo record for sailing non-stop around the world on 28th November 2004. During her circumnavigation, she set records for the fastest solo voyage to the equator, past the Cape of Good Hope, past Cape Horn and back to the equator again. She crossed the finishing line on 7th February 2005, beating the previous record set by Frenchman, Francis Joyon by 1 day, 8 hours, 35 minutes and 49 seconds. He has since reclaimed his title again in January 2008. She was made a Dame Commander of the Order of the British Empire in recognition of her solo, round the world achievement following her return to England in February 2005. She was also made an honorary Lieutenant Commander of the Royal Naval Reserve on the same day. Her charitable work includes The Ellen MacArthur Trust, set up in 2003 to take young people aged between 8-18 sailing to gain confidence on their way to recovery from cancer, leukaemia and other serious illnesses. She published her first autobiography, 'Taking on the World' in 2002 after completing the VendÈe Globe, followed by 'Race Against Time' in 2006. MacArthur is currently heading up BT Team Ellen, a three person sailing team which includes Australian, Nick Moloney and Frenchman, SÈbastian Josse. It is a 3-year partnership looking for success on the water across a number of disciplines, including the IMOCA Ocean Racing World Championships and the Extreme 40 catamaran series. MacArthur also has responsibility on and off the water as BT's Global Ambassador for their corporate social responsibility programme under the 'Better World' banner. MacArthur has hinted that rather than attempting to reclaim the world record back from Frenchman, Joyon, an attempt at the 2012 VendÈe Globe is likely to be her next big venture.

Contributors: Do you have a site related to Ellen MacArthur?
Supply some content for this page and we will gladly add a link to your site. Email here.