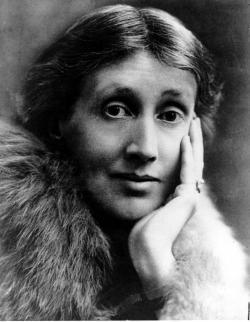 'I would venture to guess that '... More

For most of history Anonymous was a woman. This quote from Virginia Woolf establishes her feminist credentials while her writing places her squarely in the modernist camp. She is remembered as perhaps the most iconic figure in the Bloomsbury Group: writers, painters and intellectuals whose mission was to bring avant garde ideas to stuffy Edwardian England.

Adeline Virginia Stephen was born in London, on January 251882. She was the daughter of Sir Leslie Stephen (1832-1904), literary critic and first editor of the Dictionary of National Biography. Educated and abused at home Virginia was to suffer from recurrent episodes of mental instability during her lifetime, the first occasioned by the death of her mother in 1895. Following the death of her father Virginia moved to 46, Gordon Square in Bloomsbury which was where she was to meet many of the leading intellectuals of the day including Lytton Strachey to whom she became engaged. However her husband and lifelong companion was to be Leonard Woolf, whom she married in 1912.

In 1917 the Woolfs founded the Hogarth Press, publishing T.S. Eliot and other influential writers including Virginia herself. Her many essays and experimental novels include Mrs Dalloway (1925) To the Lighthouse (1927) and Orlando (1928); this last seems to have been inspired by her passionate relationship with Vita Sackville West. A Room of Ones Own published in 1929 dealt with the difficulties which confront women and became a classic of feminist literature. During a protracted bout of depression in 1941 Virginia on March 28 filled the pockets of her coat with stones and walked into the river Ouse in Sussex where she drowned.

Contributors: Do you have a site related to Virginia Woolf?
Supply some content for this page and we will gladly add a link to your site. Email here.