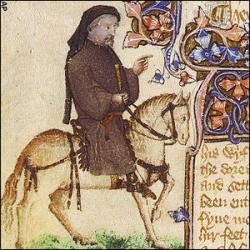 Geoffrey Chaucer was born circa 1343 and died circa 25th October 1400. He was an English author, poet, philosopher and diplomat, best remembered for writing, 'The Canterbury Tales'. He was born, probably in London, to a prosperous vintner, John Chaucer, who had carried on the family wine merchants business from Ipswich. There is little known about his education and early life, but it is documented that he was page to the Countess of Ulster, as well as working as a courtier, a diplomat and a civil servant. He worked for King Edward III, collecting and inventoring scrap metal, and in 1359 in the early stages of the Hundred Years War, Chaucer travelled with the English army when they invaded France. He was captured by the French during the siege of Rheims, but was ransomed by King Edward III for the sum of £16. Edward later sent him on diplomatic missions to France, Genoa and Florence. Around 1366 Chaucer married Philippa Roet, a lady-in- waiting in the Queen's household. They are thought to have had 3 or 4 children. Philippa's sister later married John of Gaunt, the King's son and Chaucer's patron. He became a member of the royal court of Edward III in 1367 as a yeoman, a position which entailed any number of jobs. He travelled abroad extensively, and around this time he was believed to have written his first major work, 'The Book of the Duchess', in honour of Blanche of Lancaster, the wife of John of Gaunt. His travels exposed him to the work of authors such as Dante, Boccaccio and Froissart. In 1374, Chaucer was appointed Comptroller of the Customs for the port of London. Sometime in the early 1380s he moved to Kent and was elected a Justice of the Peace. It is thought that this was when he started work on The Canterbury Tales, observing pilgrims' activities as they passed along the Pilgrim's Way in Kent on their way to Canterbury Cathedral. He also became MP for Kent in 1386. In 1389 he was made Clerk of the King's Works, overseeing royal buildings projects. He held a number of other royal posts, serving both Edward III and his successor, Richard II. By the end of the 1380s his most famous work, 'The Canterbury Tales', consisted of 23 stories from a diverse group of pilgrims recounting travels to and from Canterbury. The intention was to have 30 pilgrims telling 4 stories each, but Chaucer's death probably limited the content. His other works include 'Parlement of Foules', 'The Legend of Good Women' and 'Troilus and Criseyde', as well as a number of poems. William Caxton, the first English printer, was responsible for printing the first two folio editions of The Canterbury Tales, published in 1478 and 1483. Soon after the overthrow of his patron, Richard II, Chaucer disappears from the historical record around 1400, and is thought to have died soon after. There is some speculation that he may have been murdered by either enemies of Richard II or on the orders of his successor, Henry IV. He was buried in Westminster Abbey, and in 1556 his remains were transferred into an ornate tomb and he became the first writer interred in Poets' Corner.

Contributors: Do you have a site related to Geoffrey Chaucer?
Supply some content for this page and we will gladly add a link to your site. Email here.