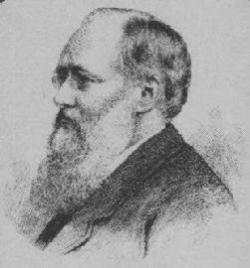 Wilkie Collins is credited by many critics with being instrumental in the development in England of the suspense novel and its close cousin detective fiction, The Moonstone in particular being a seminal work in the crime sphere.
Collins was the son of a Royal Academician, William Collins. Though he lived for several years in Italy with his parents they were the opposite of bohemian, and his fathers high Anglicanism pushed the son towards a rather less blameless (for Victorians) life: Wilkie became dependent on opium, an addiction sparked by illness, and at one time towards the end of his life he kept two households, with one of his mistresses bearing him three children.
After five years clerking for a tea company he read for the bar, being called in 1851. But in that year he was introduced to Dickens (an acquaintance of his fathers). Their friendship bloomed, and the literary genius fighting to get out of the younger man had its escape route. Dickens serialised various works by Collins in his magazine All the Year Round; the two collaborated on at least one play and several short stories; and Dickens seems to have provided a valuable sounding board for the younger author.
In 1859 Collins published The Woman in White, the inspiration of which came from his own life  a chance encounter with the widow Caroline Graves, who was to be his partner for many years, suggesting the titular character and story. He made his name, and entered his most productive decade, culminating in The Moonstone. As his works were published in serial form they build suspense and rebuild it, making them sensational as contemporary critics had it.
After the death of Dickens in 1870  and the two had become more distant already because of Collinss worsening laudanum addiction  the younger man had lost a guide; his works became worthier, eschewing suspense for noble causes, and consequently were far less successful. He died on September 23 1889. For some time his star faded, but in the second half of the 20th century his works received renewed critical praise, and his two greatest, The Moonstone and The Woman in White are now widely regarded as classics of the English novel.

Contributors: Do you have a site related to Wilkie Collins?
Supply some content for this page and we will gladly add a link to your site. Email here.