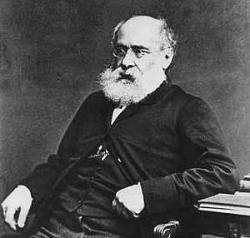 Anthony Trollopes novels chronicle the life of the Victorian middle class, fascinating exposés of the machinations of money and morality in an outwardly polite society.

Trollope was born in London on April 24, 1815. His father was frustrated in his legal career and bankrupted in his business ventures, while his mother succeeded as a writer. The upheavals he experienced as a child, including having to move to Belgium to escape creditors, made a lasting impression on the young Trollope who remained an assiduous worker throughout his life.

Trollopes long career in the Post Office began as a lowly clerk rising to postal inspector in Ireland in 1841. In 1844 he married and began writing to support his new family. Although his early novels failed to take off his fortunes changed when his postal duties took him to Salisbury where he conceived the ideas of the Barchester novels. The first of these The Warden (1855), a wise and humorous novel set in a cathedral city, began a series that was so vividly imagined the characters seemed to take on a life of their own.
During 1858 -1859 Trollope travelled extensively in his work for the Post Office. He later used his experiences in Egypt, the West Indies and the United States for his stories and travel books. He was promoted to Chief Inspector of the Post Office in 1859 and is credited with the introduction of the iconic red postbox. Through all this time Trollope kept on writing and his autobiography reveals that he was an extremely disciplined and highly productive writer beginning as early as 5.30 in the morning and writing around 1000 words an hour. He finally left the Civil Service in 1867. In all he wrote 47 novels including the political satires of the Palliser novels, the highly regarded He Knew He was Right, and The Way We Live Now, a stinging satire on the Victorian upper classes. Anthony Trollope died in London on December 6, 1882.

Contributors: Do you have a site related to Anthony Trollope?
Supply some content for this page and we will gladly add a link to your site. Email here.