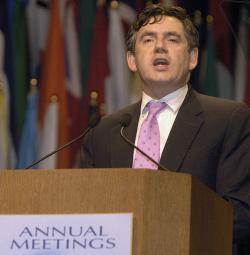 
Son of Church of Scotland minister. Educated at Edinburgh University. Worked as lecturer and television journalist. Entered House of Commons in 1983 as Labour MP for Dunfermline East. In 1997 became Chancellor of Exchequer when Labour came to power.

Contributors: Do you have a site related to Gordon Brown?
Supply some content for this page and we will gladly add a link to your site. Email here.