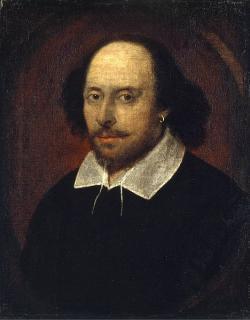 'When words are scarce they are'... More

Son of a glover and wool dealer. Married Anne Hathaway when he was 18 and had three children. Joined London acting company that had been touring Stratford. By 1595 had written several successful plays. Between 1594-1598 he wrote six comedies, five histories, and one tragedy and took London by storm. The Globe was built and his plays met with further popular success. Wrote sonnets that were not published until 1609. Returned to Stratford, died at home and buried in the church where he was christened.

Contributors: Do you have a site related to William Shakespeare?
Supply some content for this page and we will gladly add a link to your site. Email here.