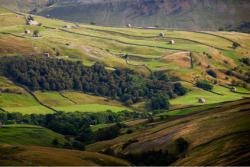 Wensleydale is found on the eastern side of the Pennines in North Yorkshire. Dale is a word meaning valley and indeed Wensleydale is the valley of the River Ure. It is the only one of the Dales not named after the river it hosts. Instead, it has been named after a small village called Wensley. It was formerly known as Yoredale, which is derived from the River Ure.

Wensleydale is within the Yorkshire Dales National Park and is a very popular tourist destination and the area has many activities to offer the visitor. Walking is obviously one of the areas principle attractions, but cycling, water sports and fishing are also popular ways to pass the time in this spectacular and tranquil part of England. Hawes and Leyburn are established destinations. They are well placed and both have good facilities such as pubs , teashops, shops and hotels . Hawes is home to the famous Wensleydale cheeses .

The Wensleydale Railway runs in Wensleydale between Leeming Bar, by the A1 and Redmire, near Castle Bolton. Long-term plans hope to extend the line the entire length of the valley to enable it to connect with the National Rail network at at Garsdale on the Settle-Carlisle Railway in the west and Northallerton on the East Coast Main Line in the east.