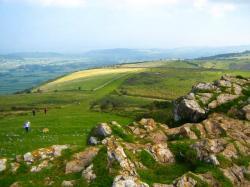 The Mendip Hills, or the Mendips, are a range of hills that tower above the Somerset Levels . They rise to 1,066 ft at Beacon Batch and run from Weston-Super-Mare in the west to Frome in the east. The Somerset Levels lie to their south and the Avon valley is to the north. An area of the higher part of the Hills, an 80 square mile portion of the western region, has been designated as an Area of Outstanding Natural Beauty (AONB). The Mendip Hills AONB Service and Somerset County Council run an outdoor education centre at the Charterhouse Centre, near Blagdon .

The Mendips are an ideal place to enjoy a wide range of outdoor sports and leisure activities . The particular geology of the area means it is an internationally recognised centre for caving and cave diving, and one of the most important in Britain. Climbing and abseiling are very popular in the Mendips, as is hill walking. It is also a magnet for those with an interest in natural history.

There are three habitats which are characteristic of the area. They are the Ash-Maple woodland, Calcareous grassland and Mesotrophic grassland. Much of the Mendip Hills is of the open calcareous grassland type, which is home to a large variety of wild flowering plants and insects. Grazing by rabbits, sheep and cattle ensures the grassland habitat is maintained. There are some areas of deciduous ancient woodland. The area has also been used intensively for arable agriculture but, as demand for arable land in England declines, portions of this land are slowly returning to grassland.

The Mendip Hills support several bird species, not least of which is the Peregrine Falcon. This rare raptor has gradually returned to the Mendips in the past twenty years. It nests on cliffs, both on the coast and inland, and also favours the faces of active and disused quarries. The colonisation of the Mendip Hills by the Dartford Warbler, which can be found at Black Down and Crook Peak, is another notable event. In Britain, this species is usually associated with lowland heath so its appearance in the Mendips is unusual. The woodlands at Stock Hill are known as a breeding site for the Nightjar and Long-eared Owl. In 2007 the first confirmed sighting of a Red Kite on the Mendips was made at Charterhouse. The birds are only part of the rich wildlife tapestry of the Mendip Hills, a tapestry that also includes many rare and interesting mammals, reptiles and insects.