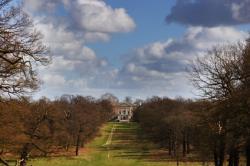 Richmond Park is Britain's largest urban walled park. It is three times the size of New York's Central Park at 2,360 acres and is the largest of the Royal Parks in London. It lies on the south western edge of London near to Richmond , Ham, Kingston upon Thames , Wimbledon , Roehampton and East Sheen . It was originally enclosed by Charles I in 1637 for use as a royal deer hunting park.

As with any open space situated in a heavily populated urban area, Richmond Park is very popular. There are many things apart from the open space itself that attract visitors, perhaps the most iconic of them being the 600 or so red and fallow deer.

Within the park King Henry VIII 's Mound gives a wonderful view of St Paul's Cathedral that is protected from any obstruction by planning regulations dating back to 1710. The view also affords the visitor a sighting of the Nat West Tower, The Gherkin and the London Eye , all as if they were all arranged on the same block. The mound is located within the public gardens of Pembroke Lodge. Although the mound is named after the Tudor King Henry VIII, there is speculation that it may have originally been a Neolithic barrow.

The boundary wall of the park is, in its entirety, a listed building. The wall is one of several listed structures within the park. The former home of the 1st Earl Russell, Pembroke Lodge , is another of them. The house is now a restaurant. White Lodge, originally a hunting lodge for George I , is another and is used by the Royal Ballet School for the training of younger ballet students.

Richmond Park is a Site of Special Scientific Interest, a National Nature Reserve and a Special Area of Conservation for the rare Stag beetle. Within the grounds of the park are some extremely old trees. However, planting has continued to ensure that the tree stock isn't diminished by age, disease and storms. The park provides an important habitat for other wildlife, including woodpeckers, squirrels, rabbits, stag beetles, insects and varieties of fungi. There is also a significant colony of Parakeets in the park. Believed to be bred from birds that have escaped captivity the Parakeets are thought to be of the Ring-necked type. Such colonies of birds not normally native to Great Britain are actually becoming quite common in some urban open spaces.

The roads through the park are usually open to the public. The weight of traffic using the park has become a concern, especially in recent years. Various solutions, including the outright banning of motor traffic from within the park, have been suggested. Robin Hood Gate was closed to motor traffic as part of a traffic reduction trial in 2003. Opinion over the solution to the park's traffic problems are still sharply divided. Traffic within the park is subject to a blanket 20 mph speed limit.