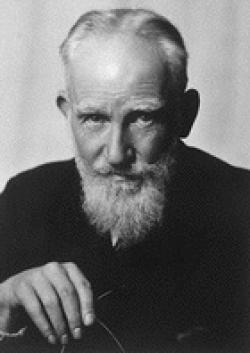 'A fashion is nothing but an induced epidemic.'

'A government that robs Peter to pay Paul can always depend on the support of Paul.'

'A happy family is but an earlier heaven.'

'A life spent making mistakes is not only more honorable, but more useful than a life spent doing nothing'

'A man never tells you anything until you contradict him.'

'A perpetual holiday is a good working definition of hell.'

'Alcohol is the anesthesia by which we endure the operation of life.'

'All great truths begin as blasphemies.'

'An asylum for the sane would be empty in America.'

'An election is a moral horror, as bad as a battle except for the blood; a mud bath for every soul concerned in i'

'Assassination is the extreme form of censorship.'

'Beauty is a short-lived tyranny.'

'Beware of the man who does not return your blow: he neither forgives you nor allows you to forgive yourself'

'Dancing is a perpendicular expression of a horizontal desire.'

'Do not try to live forever. You will not succeed.'

'England and America are two countries separated by the same language.'

'Every man over forty is a scoundrel.'

'I enjoy convalescence. It is the part that makes the illness worth while'

'I would like to take you seriously, but to do so would be an affront to your intelligence'

'If all the economists were laid end to end, they'd never reach a conclusion'

'If there was nothing wrong in the world there wouldn't be anything for us to do.'

'In heaven an angel is nobody in particular.'

'Independence? That's middle class blasphemy. We are all dependent on one another, every soul of us on earth.'

'It is most unwise for people in love to marry.'

'It's easier to replace a dead man than a good picture.'

'Lack of money is the root of all evil.'

'Liberty means responsibility. That is why most men dread it.'

'Life contains but two tragedies. One is not to get your heart's desire; the other is to get it.'

'Most people do not pray; they only beg.'

'My reputation grows with every failure.'

'Oh, the tiger will love you. There is no sincerer love than the love of food.'

'Old men are dangerous: it doesn't matter to them what is going to happen to the world'

'Patriotism is your conviction that this country is superior to all others because you were born in it.'

'Silence is the most perfect expression of scorn.'

'The first condition of progress is the removal of censorship.'

'The perfect love affair is one which is conducted entirely by post.'

'The things most people want to know about are usually none of their business.'

'There is only one religion, though there are a hundred versions of it.'

'When a stupid man is doing something he is ashamed of, he always declares that it is his duty.'

'Youth is a wonderful thing. What a crime to waste it on children.'