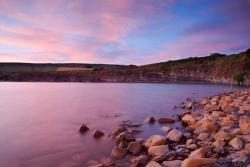 Review of Portland by Andrew Shiston on June 11th, 2007
I was born in a house called 'Ivy Banks' on Portland's Top Hill 1943. Although I now live in Lincolnshire I still write poetry of Portland and Dorset. Below is one of my poems of Portland. A Time Before The Island appeared from the parting mist The cliffs rise from rocky broken bones Surging tides of centuries laid waste And cleansed this marbled artery of stone On the cliff a gallery of cradled nests of lamps White light for the wreckers moth Beneath the baleful eye Rests the fishermen's windswept homes Windows glow with warmth Black ranges chuckle glowing red Driftwood, kindling piled against the shed Gallows, timbers thick as stilted trees Hunch over clinkered stalwart fishing boats Waiting to be lowered by block and tackle Into the Islands gale flung seas With the wind comes the cracked buoys bell Warning of four racing tides The full flood sweeps in across the rocks Dark seaweed with that salty ozone smell Dragged from below the sweating cliffs Spume filled waves leave foam As thick as snow upon the windswept roofs Flotsam, limbs of broken trees Washed up and flung across a shingled beach Lay as broken skeletons, kindling For the men who fish and brave these seas As the winds abate, seas ebbing Leaving mountains bones of broken stones Shingle stretching towards the land An isthmus created by the storms applause Stretching out towards the distant shores.