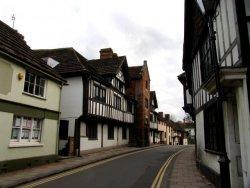 Review of Steyning by Kate on May 21st, 2007
I am wondering if this is the Nicholas Hamilton who was in the Kings Royal Dragoon in late 70's early 80's and who got to know 2 Australian beauties Kate and Jane ( the colonial girls)??? If so please respond Thank You

Review of Steyning by on April 1st, 2006
Steyning was a major port during the Anglo-Saxon period, and important enough to have Alfred the Great's father buried there [he was later re-buried, at Winchester]. Lovely shopping centre here, amid ancient buildings and welcoming old pubs, and a generally nice villagy feel. Steyning Church is a spacious Norman building, at one time much bigger, with an Elizabethan tower. The local museum is run by volunteers, and its website can be found at: http://www.steyningmuseum.org.uk