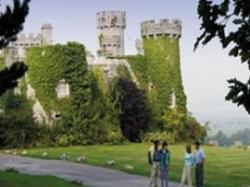 Add your review
I found that the young staff needed supervision as a lot of times they had a dismissive attitude to customers. I ordered a G&T and he just walked off into the cabaret room for empty glasses. The young man who was left at the bar just ignored me. The previous man came back and put ice in my glass which I didnt want and was much annoyed when I told him. We also had problems with the slowness of service in the dining room. This morning everything was perfect in the dining room probably to receive tips which they didnt get. The young staff should be made aware that only for customers they would not have a job. They need supervision.

Add your review
We had a perfect time, every thing was just right even the weather. Food,leisure ,Accommodation. Staff was very friendly Entertainment was very professional The musicals they sang was perfect. lea and the girls made the evening Special. M & M JOHNSON Just one thing missing a nice LOUNGE.with soft Chairs. M&M Johnson

Add your review
This is the second time we have been to Warner for a holiday this year (previously knowing about their holidays but not participating) 1st holiday was our wedding Anniversary in February on the Isle of White. On the IOW reception staff were incompetent, I had some vouchers to use for on site spend staff were reluctant to allow me to use them until, when I left they said there was no bill to pay. Despite this they took money out of my account with out authority, which was the voucher equivalent £40.00. I got my money back and more on site spend vouchers. I booked in January to go to Bodelwyddan Castle taking advantage of early booking so wanted to use my vouchers now £60.00 on this holiday. The manager in Bodelwyddan said Give us a chance we are not going to take money out of your account like the IOW did I can guarantee this The Location of Bodelwyddan Castle is breathtaking. Our room was the top, we splashed out as it was our Summer holiday. We were not disappointed and stayed in one of the updated turret rooms. I was worried because of the reviews featured here warning not to go to this Warner holiday destination. Theres plenty to do, archery, shooting, wine tasting, cocktail making and pimms nights. All staff are very pleasant. The staff who cleaned the room was very pleasant and topped things up as you asked. We had luxury toiletries. We found the food very good  ok at times a little like a rugby scrum but you get this on a cruise as well. Plenty of choice and they did their best. Its not as reported just above a School canteen but as good as some restaurants in town. You have guessed it they took money out of my bank account again!! On the last night I tried to pay my bill  they had a computer fault and in the morning it was chaos. They had all night to fix the fault or do a manual reconciliation but failed to do either. When you purchase using a charge card you sign one slip and get one for your records. Its not difficult to work out some ones bill, they coop ok on a cruise. The receptionist took my vouchers and cash as payment but offered no receipt, until I said that this was unacceptable. I instructed her that I did not want any illegal money taken out of my account and with the vouchers and cash my bill was settled. The reception manager was in earshot and heard our conversation. She said she would personally ensure that my account would be closed and no monies would be taken out of my account. I anticipated the wine (expensive from the last night would go through even though the receptionist had manually added it to my bill) (she said she would cancel the duplicate in the system!) I even wrote to the manager before I left to say I had paid my account and would not except overpayment  twice in one year would be unacceptable. Got a bill the next day and notification £29.97 had been removed without authority from my bank! What ever you do dont open an on site charge card when you stay at a Warner Hotel. I am trying the 3rd time this year with Warner, its my Birthday in October and we are going away  this time I declined on site spend vouchers and have taken the money off my booking instead. A perfect holiday in an idyllic location slightly marred by yet again poor admin.

Add your review
We booked a seven night break at this Warner Hotel, partly based on its location in North Wales, and also on the historic and "luxury" status advertised - expecting the hotel to have the character of a grade II listed building as advertised on the Warner web-site. The castle and hotel are indeed set in lovely grounds, and the view from our room was splendid, looking out from the front of the castle. We stayed in one of the Royale rooms at Bodelwyddan, apparently their best (and most expensive) rooms (there are only seven of them, set in the main castle). However, though the main castle building (which is not part of the hotel, but a museum, opened periodically - well worth a visit) is superbly maintained in period, and full of character, our room could have been in any reasonable 3 star hotel or B&B (the only discernable feature was the original window, and the fantastic view). The furniture was solid, with a large and comfortable bed, though the furnishings and decor were tired, and the bathroom no better than a travelodge, quite tired - the so called luxury spa bath was noisy, old and smelt of bleach when switched-on(though the shower was excellent).The room was kept very clean and tidy, and our cleaner could not have done much better. The room was nice and quiet, though it wasn't possible to have the widow open if it was windy at night, because of the noise created by the air flow through the aircon/vent in the bathroom. The dinning experience was very disappointing, it felt more like a Butlins Holiday camp than a luxury hotel.It was difficult to find a properly clean plate and seemed to be rather short staffed. The whole event felt rushed as staff sprayed, cleaned and laid tables for breakfast while we were still eating our dinner. The atmosphere was certainly not one of romance or intimacy as the tables were so tightly packed together there was no chance of having a private conversation and the dinning hall was very brightly lit. Our waitress was great and did her best. The food, while plentiful, was similar to decent pub grub, not a restaurant and considering there was no A La Carte choice this was disapointing. We used the gym once but found it rather poorly staffed and busy, though we attended at the most popular time of day. We were surprised to see members of hotel staff using the facility at this busy period. The haphazard management continued with the parking, which was difficult as the hotel was busy. There is adequate parking overall, with overflow available in the large museum car park, a shortish walk (over 100m). However, staff cars were parked in and around the castle courtyards, and in the car parks close to the accommodation, forcing some guests to use the overflow carpark. Great when the staff want to smoke out of the rain on their break, not so good for the guests walking uphill to the hotel carrying bags. Overall this is not a bad hotel, but it could be run better, and it is not a luxury, character hotel as described in Warner's literature. Even the reception looks like a travelodge, with gaming machines. The staff are very friendly and helpful on the whole, but some seem to lack hospitality training, and they were understaffed. For what we paid, we expected better. We did not sample the entertainment, and perhaps that would make a difference for some people. We would not go back to this hotel given the costs, as we do not think it represents value for money. If you like the Warner experience, go to another location to avoid disappointment.

Add your review
We stayed for a short break in Jan 2009. We booked the signature room which is an upgrade from the standard ambassador type. We were impressed by the magnificent views across the welsh countryside and the castle itself is very picturesque. On arriving we were disappointed by the lack of adequate parking facilities and particularity found it almost impossible to locate an unoccupied disabled bay. The staff were welcoming enough but there was no porters available to help with luggage as you would expect with a luxury hotel. The room was comfortable and included a standard bath with a power shower a fridge (empty) and a flat screen TV and DVD player. Their was a lovely views from the window over the gardens. Personally I would not consider this to be a luxury room I have been in better in three star rated hotels although it was clean and functional. The break included two evening meals. These are served in a large restaurant which caters for all the guests. The restaurant has a policy of allocating you a table in the restaurant on arrival , this remains with you and you use it for the rest of your stay. On the upside this means that there is no waiting to be seated at meal times as your table is always free, on the downside it means that even if the restaurant is half empty you are still cramped in by empty tables, as the place really is not big enough to have all the tables out and leave enough space around them for comfort. We had three inches between us and the next guests table. Again for a luxury break I was slightly disappointed with the restaurant, although the service was very good the main meal was infarct a carvery, and I noted that many of the guests complained about the standard of cleanliness of the plates and utensils. I had to sort through 8 plates before I found a clean one on one occasion. Generally the food was of good quality and there was plenty of it although definitely not fine dining. The best part of the break was the gardens and the museum, which were beautiful and fascinating. The attendants were very knowledgeable and friendly and you can spend a good day or so just wondering around . There is also a coffee shop which supplies lunches and snacks. We booked an themed weekend, the club is located next to the restaurant and is has a good size dance floor. Wee saw many of the advertised activities going on, archery table tennis etc and people seemed to be enjoying themselves. On the whole we had a good time and are glad we went, however whether I would spend that amount of money on what really was a stay in a three star hotel again when I could get far better accommodation for the same price either at home or abroad is debateable. Perhaps if we had been in a position to use some of the other facilities on offer my opinion would be different.