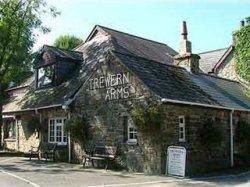 Add your review
My husband and I have stayed four times since 2005 and we have booked for a long weekend in July to celebrate our 9th wedding anniversary. The bar food is good especially the home made lasagna and steak and kidney pies, we have also taken other family members there for a bar meal, travelling from Cardiff, and they have also enjoyed it. The rooms are large and airy, the service is friendly and the restaurant food is wonderful, try the Trewern Arms mushroom starter, not for the feignt hearted. No better place we can think of to spend our special occasion.

Add your review
We visited this pub for lunch at Easter it is in a lovely location with a large car park , we decided as the food was Ok to try the restaurant on the Saturday of the bank holiday weekend. It was terrible the service was appalling, no proper greeting, given menus told to sit and wait for waitres, if you want drinks go to bar and get them yourself, waited over half an hour before order was taken, food was worst we have had in 50 years of dining out, veg overcooked to mush poorly presented, steaks were flambed at the table the spirit made the watery suace taste bitter,fish overcooked, also expensive ,the only good point was the house wine which was a Chilean merlot very nice,.Will not be going here again.

Add your review
We visited the Trewern Arms whilst on holiday, and as a treat for my husband's birthday. I don't think i have ever had such bad service and terrible food in one place before. What a disappointment. On arrival the staff were very unwelcoming, and we did have second thoughts about ordering food, unfortunately we didn't act on our gut instinct and stayed. My huband ordered fish pie off the "the Specials board" which he found inedible, and had to leave. The children had burgers, and after one of them commented it "tasted funny" i tried some, it was the most disgusting burger i have ever tasted, and i told them not to eat them. The staff did not approach us once to ask us how the meal was, i wonder why?? On paying the bill, i mentioned that we weren't happy with the meal, but received no apology and we paid for meals we had barely touched. If you are considering going think again you will be disappointed.

Add your review
My wife and I stayed at the Trewern Arms for the weekend and I have to say that the location and pub itself are brilliant. The room that we had was spotlessly clean and huge with a lovely view overlooking the garden. We ended up eating in the restaurant both nights because the food was so good and the staff were excellent. After our meals we went into the public bar both nights and were made to feel welcome by both the staff and regulars. Overall we couldn't have chosen a nicer place to stay for a relaxing break.

Add your review
Well we have been there in the Trewern Arms more than once. It's a nice Pub and we had no complains about the Food,Price was right and and plate was loaded. The Steak's are huge and the best i had in a long time.

Add your review
We went to the Trewern Arms because of an ad in a Pembrokshire free paper for tourists. We got there and it looks great from the outside, when we went in we found a counter where you could order your food and eat in the bar. We asked about the restaurant and were told "you have to book that" and the person then walked of without asking if we cared to book (first bad mark). So we decided to eat in the bar(not a great amount of space but we thought at least the food would be good. We ordered and had to pay before we got the meal, which was mediocre. The tv was on but not loud and was showing celebrity masterchef which we enjoy and the only other person in the bar area was enjoying too. The landlord or bar manager decided he did not want that on so instead of asking if anyone was watching just switched it over to sport and walked off (second bad mark). We decided to order dessert to be paid for before you get it, well I had what was described as jam roly poly with custard, (better described as a slice of jam roll with custard) both being cold. My daughter had waffle with syrup and ice cream (arrived without the ice cream. We sent both back. My wife had the trifle, you could have played frisbee with what could only loosely be described as custard. And it tasted awful after sending the first two back she just left the trifle and we decided to go. As I was waiting for them to go to the toilet I noticed as i was waiting one of the waitresses pointing at me and smirking, so who knows what they had done to the desserts we sent back. Avoid this place, it is really not worth the drive to eat there.