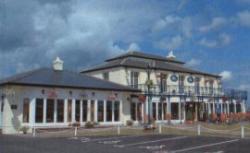 Add your review
We live locally and we visit the Rubbing House often and we have always had a great meal as I understand from most of the Waiter's the food is bought in fresh. The team that work their are all very nice and attentive. I think the prices are more than resonable personally....

Add your review
Being a local person, I suggested to some out of town friends that we could eat at the Rubbing House. My first misgivings were the list of rules presented on a black board at the entrance of the building. Our three children ranged from 10 to 2 and half so I was grateful that we didnt have to worry about the no pushcairs rule but assumed that no pushchairs didnt also mean a zero tolerance to children. My concerns are both about the food served and the waitress who served us. Firstly, we ordered our food which was duly delivered and although some of the dishes were fine, the two fish dishes were really so badly cooked that we had to return them. The Salmon was hard and the vegetables were overcooked, wet and mushy. The Sea Bass dish contained potatoes that had black lumps in them. The potatoes were wet, mushed and looked like a soggy brown mess. When I go out for meal I expect my food to be cooked to at least the same standard that I could do for myself at home. I didnt expect to be presented with wet canteen style vegetables and fish ,which when cooked properly should be succulent, but which was dry and hard. When we explained our concerns to the waitress, she was clearly impatient and took our dishes away so fast that she dropped all the cutlery on the floor and didnt bother to pick any of it up until she returned later on. She poured the wine without asking any of us to taste it first. When we asked for the bill to be split in half between the two parties, the waitress split the £127.00 bill into £60.00 and £67.?! At some point during this meal, my 10 year old god daughter, kindly took my 2 year old daughter to the toilet. During this visit our waitress admonished my god daughter and told her to keep the 2 year old quiet since this was a restaurant and not a playground. I did not hear about this until we had left the restaurant but I strongly feel that if there is no tolerance at all to a 2 year old on her way to the toilet then the restaurant should add to the list of rules that children are not welcome. This would have saved myself and my party from spending £127.00 on a meal that could have been cooked to a better standard by my 18 year old son.

Add your review
Absolutely awful. The barman that we met on walking through the doors for the first time was so rude to us, he barked rules down our throat, does not know the meaning of please or thank you. All the rules are on a chalk board as you enter!! Expensive, noisy, food not really that great, never go there again.

Add your review
Having heard good reviews about this pub we thought we would try it our for ourseleves. We where disapointed prices seemed expensive although portion sizes were reasonable the food itself was not especially good. We had the soup which was bland and watery followed by the souvlaki. The dish was not particularly innovative and when it came the chicken was tough and the chips where lukewarm. The restaurant itself has been nicely decorated but it was very loud and clattery. It seems to be a bit of a hit or miss place and we definately missed.