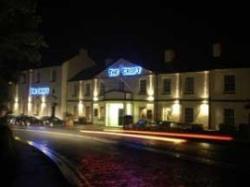 Reviews of The Croft, Darlington

Add your review
This was my first visit at the restaurant at the Croft hotel. Upon entering the building, we were greeted by one of the service staff and shown to the bar. We were given A5 laminated menus, and it felt as if i had entered a cafe on the seafront with a wipe clean menu. 25 minutes later i had to take it upon myself to ask a member of staff to take our order as on several occasions we were ignored by staff. Moving into the restuarant we were shown to a decent size table. We were served as what could only be described as fresh bread the size of a pea! Ten minutes later, our overpriced starters arrived, although they were very tasty. At this point it was evidentgain that the service staff were un-skilled and had no hospitality experience. Not once were we asked for drinks, despite having an empty glass through two courses. Our empty starter plates remained on our table for another 15 minutes. The staff took it upon themselves to clear the table, taking my partners side plate, but leaving mine. Our main courses arrived and were excellent, but again the unskilled staff just placed the plates infront of us and disappeared. (empty glass still infront of us) For desert we ordered an assiette of deserts for £12.50 and it was a very good selection of the house deserts. Although, the waitress knew it was for 2, she placed the dessert on the table, left no cutlery or side plates! so we had to ask. Overall, i must say the food was excellent, but the whole experience was let down by the unskilled and what seemed like a restaurant that had no managment as the young staff were left to just do what they pleased (very little).