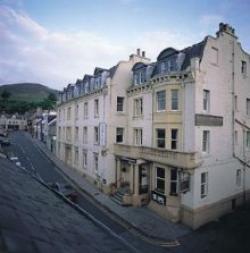 Add your review
booked a single (110) and a twin room(104) on-line at this hotel very last minute. I didn't request no smoking rooms thinking they were all non smoking, and got allocated smoking rooms, although to be fair they did not smell of smoke. The corridor leading to the rooms had a strong smell of the kitchen below, and was dimly lit in places and the carpet was quite badly stained. For some reason all the fire doors in the corridor were held open with fire extinguishers late at night. The rooms were adequate. The shower in 110 was lukewarm and both rooms shower cubicles had some mildew inside. The rooms were warm, although the control valve head was missing from the radiator in 104. The beds felt ok and appeared clean. To summarise the staff at the George and Abbotsford were pleasant enough, although the hotel can best be described as a bit tired and in need of some major investment. If you really must stay in Melrose and you can't get anywhere else then fair enough, otherwise I would recommend paying the extra for a couple of the nearby hotels which looked excellent but were fully booked at the time of my stay or some of the excellent B&B's which are available in Melrose for the same sort of money as the G&A