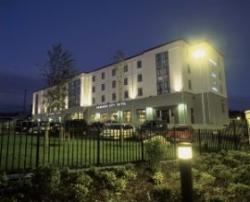 Add your review
Booked hotel for wedding party 9 months in advance. Don't bother to have a pre-wedding meeting as all these details were ignored! Complete lack of communication between staff. Staff mislead us everytime they opened their mouths! Showed us a large room with balconey, ended up with a tiny,dirty,smoking room!! Smaller than all our guets! All staff were untrained and ignorant!! Inexperienced mangagement who do not communicate. One manager was unbelieveably ignorant, breached the confidentiality of my complaint! There was an obvious lack of staff on the night. Over half of wedding guests weren't served drinks for toast! Full bottles of wine were collected FROM tables. Management were nowhere to be found on many occassions during the night. It was left upto family to instruct waitresses on how to operate. Nightporter was rude, told a paying (non-drinking) guest to "Get out of the hotel or you'll be thrown out!". Then accepted £10 to let them back in!! Bar staff wouldn't even serve a glass of water to a diabetic!! I regret not listening to rumors about the hotel