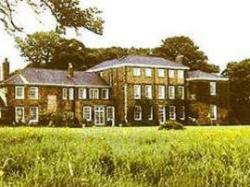 Rowley Manor is a fine English Georgian House, set in 34 acres of lawns, rose gardens and parkland. It is ideal for either a business meeting or conference, or a relaxing stay in an informal and friendly atmosphere.

Rowley Manor was once the rectory to Saint Peter's Church, which has existed at Rowley since 1150 and is set within the manor's grounds.

The Rectory is said to have been built by Ezekiel Rogers in 1621, who later sailed in the Mayflower to become one of the Pilgrim Fathers with his parishioners, finally settling in Massachusetts, USA and founding Rowley there. It celebrated its 350th anniversary in 1989. Rowley Manor remained a rectory until 1928 when it was purchased by a local shipping magnate, T.A. Filmer Wilson of the Ellermann Wilson Line.

Wilson installed pine panelling and a magnificent fireplace by Grinling Gibbons in the study and a beautiful water temple in the garden.

The excellent restaurant specialises in fresh local produce and is complimented by an extensive wine list.

The Rowley Manor Hotel has 16 rooms on 3 floors