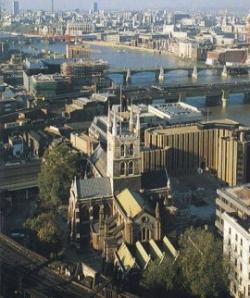 London's oldest gothic church building. A place of worship for over 1000 years. Originally the Augustinian Priory of St Mary Overie (overie = over the water, or over the bridge) it became the parish church of St Saviour at the Dissolution. In 1905 it became the Cathedral for the Diocese of Southwark.

John Gower, the first poet to write English prose, is buried here. Associations with Chaucer and Dickens. There is a memorial to William Shakespeare. His younger brother, Edmond, is buried here. John Harvard, the benefactor of America's oldest University, was baptised here and there is now a chapel to his memory.

There is a Refectory operated by digbytrout Restaurants and Shop. In an Archaeological chamber visitors can view part of a Roman road, some of the 14th century cloister stonework, and the kilns where Southwark delftware was manufactured in the 17/18th centuries.