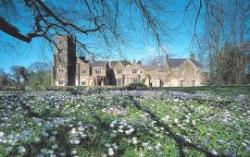 The island of Belle Isle, inhabited by the MacManus family since the 11th Century, came into ownership of the Gore family in the early part of 17th Century. A descendant, Sir Ralph Gore, built the first, but quite modest, house towards the end of that century. His grandson, also Sir Ralph, and later the Earl of Ross, was born at Belle Isle in 1725, and he made further extensions and created a magnificent garden. On the Earl's death, the estate passed to his only daughter, whose husband, Richard Hardinge, sold Belle Isle to the Rev. John Porter from England. Thus began a period of expansion and alteration, including the addition of a tower, the gallery, additional bedrooms and a porch. It was the last member of the Porter family who, in 1991, sold Belle Isle to the Duke of Abercorn, who purchased the 470 acre Estate for his second son, Lord Nicholas Hamilton. The conversion of the Castle (above), which can sleep up to 14 persons, was completed in 1993. Thereafter, the Coach House, followed by the farm courtyard, were skilfully converted to provide comfortable holiday cottages.