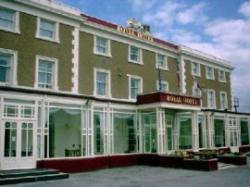 The Royal Hotel is a privately owned 25 bedroom 3 star hotel situated at Waterloo, Liverpool, overlooking the Marine Gardens and the Mersey estuary, with views of the Wirral & North Wales in the distance. The Anthony Gormley Art installation "Another Place" which consists of 100 life size Iron Men is directly in front of the hotel.Set in the suburbs of Liverpool, we are 10 minutes drive from the City Centre, Anfield & Goodison stadiums & Aintree Racecourse, home of The Grand National. We are ideally situated close to motorways (M62 & M57), Liverpool Airport & all Docks & Ferry Terminals nearby.Originally named the Crosby Seabank Hotel, this fine Grade II listed building dates back to 1815. Just one year later on the 18th June 1816, the first anniversary of the Battle of Waterloo, its name was changed to The Royal Waterloo Hotel, and the district in which it stood adopted the name of Waterloo. Today with its grand proportions and Georgian Facade, much character is retained.Furnishings and decor have been selected to reflect the elegance of the era, whilst at the same time ensuring that surroundings are comfortable, relaxing and above all, homely.