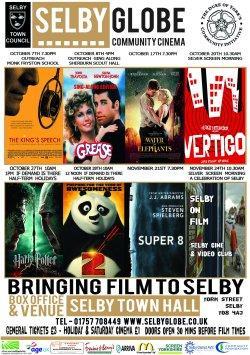 Selby Globe Community Cinema launched in September 2009 with a sell out screening of Mamma Mia, sing along at Selby's Town Hall. It was a success and people asked for more. Since that date Selby Globe has shown many successful screenings and is proud to announce the new film schedule. Please see our website for details.

New projects include the award winning Silver Screen matinee which includes a buffet lunch. Our Outreach cinema at rural village and church halls and Holiday cinema covering school holidays at only £1. We aim to screen modern film before DVD release.

Selby Globe is a not-for-profit organisation run by volunteers with a love of film. Supported by the Town Hall, Selby Globe gets the audience to select the movies they want to watch, so the event is very user led. General admission £3, Holiday cinema £1.

Selby Globe is proud to extend the provision of film in the Selby area.

Watch up and coming film trailers