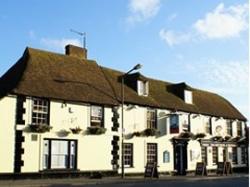 The Original Ship was built of mainly ship timber brought from the old port of New Romney. The 1st recorded keeper is one Thomas Banne, who is described as an "ostler" of the parish of Romney. The inn is mentioned in a will of 1579, when Samuel Dunstare directed that "mye hospicume and tenemente at Romneye nowne by name and syne of the Ship, and lande and staybles theretoe belonginge, be deliverede up to mye wyfe Emma, who upon mye dethe shale inherite mye title and dedes". It is recorded the Emma Dunstare kept The Ship for 31 years after the death of her husband. In 1662 it is recorded that the inn underwent extensive alteration, the thatch, wattle and daub was removed in part and replaced with titles and bricks. The present facade was erected in 1728. At the height of the coaching era of the mid to late eighteenth century, The Ship was an established coach halt being situated on the main Rye to Dover route, and is mentioned as a compulsory stop in the timetable of 1802. More recently In the 20th Century the cellar was also used as a public air-raid shelter in World War II. The en suite rooms are comfortably furnished and pleasantly decorated, offering lots of light. All room have a wireless internet connection, tea & coffee making facilities and a television, with other useful facilities such as a trouser press, desk, alarm clock and hair dryer. The hotel enjoys a heated outside area as an extension of the indoor pub. There is a conservatory area for a more sheltered drink, as well as the main pub and lounge area - which proudly displays some original features, such as the brick fireplace - and a lovely restaurant and function room. Visitors are warmly welcomed, and we are sure that you will enjoy your stay with us.