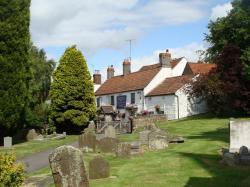 The village is divided into two parts by a steep hill. Nestling at the foot of this hill is Lower Almondsbury. Overlooking the Severn estuary the land here is shaped like a bowl. This, and not the local love of cricket, gave the pub and hotel, The Bowl Inn, its name. This whitewashed-stone inn was partly formed by three cottages originally built in 1146 to accommodate the monks building the church of St Mary the Virgin. The church's lead-covered spire was added later, but before 1619. The Bowl Inn became a licensed premises way back in 1550. The upper part of the village is served by The Swan Inn, which is on the A38 opposite the open space known as Almondsbury Tump. Visitors can also stay at the Almondsbury Interchange Hotel situated on Gloucester Road near the motorway junction.