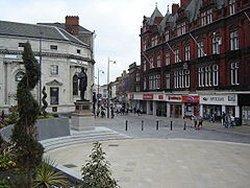 The town started life as a Saxon settlement on the river Skerne, the market now lies in the centre the town as does St Cuthberts church, one of the most important and impressive early English churches in the north of England. Also in the town centre is the Darlington Railway Centre and Museum in celebration of the association with the birth of railways, as the worlds first passenger rail journey was between Shildon and nearby Stockton-on-Tees on the Stockton and Darlington Railway in 1825. Darlington became an important centre for railway manufacturing with three significant works, the largest of which was the main line locomotive works known as North Road Slope whilst another was Robert Stephenson & Co, or Stivvies, who moved from Newcastle in 1902. The third was Faverdale Works, which became a pioneer during the 1950s in the application of mass-production techniques to the manufacture of railway goods wagons. In recognition of the towns contribution to the railway, alongside the A66 road next to the original Stockton-Darlington railway, is a life-size brick sculpture of a steaming locomotive emerging from a tunnel. David Mach made the work, named simply Train, in 1997 using 185,000 bricks and cost £760,000