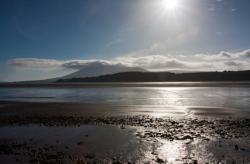 Stranraer is a large historic town in Dumfries and Galloway situated on the south-west coast of Scotland at the head of Lochryan. The town lies a short distance from the Scottish/English Border and approximately a two hour drive from Glasgow. The settlement grew up around Stranraer Castle built in 1511 and was Burgh of Barony from 1596. By 1600 Stranraer was an important market town and awarded Royal Burgh status in1617. The military road was built through Stranraer linking Dumfries to Portpatrick the main port for Ireland at the time, although this allowed Stranraer to take advantage of its natural shelter and build its own harbour c1700 with further construction of two piers in 1820 and 1840. In 1861 the railway arrived from Dumfries establishing Stranraer as the main port in the area and with the ferry taking only 90 minutes to Ireland Stranraer became known as Scotlands Gateway to Ireland. Stranraer is a popular tourist destination and an ideal location for touring the attractions of Dumfries and Galloway. Stranraer is also known as the Gateway to the Rhins of Galloway as the road north leads to Scotlands most southern point the Mull of Galloway. The town itself is well equipped for holiday-makers with a busy town centre, shops, hotels, guest-houses, B&Bs, pub, inns and plenty of places for eating out. The Stranraer Town Trail is an easy walking tour; historic features include the medieval tower-house Stranraer Castle now known as The Castle of St John. There is an 18-hole championship golf course on the shores of Lochryan with views over to Ailsa Craig and the Isle of Arran. Other local attractions include Castle Kennedy and Gardens, Logan Botanic Garden and Creetown Gem Rock Museum with exhibits from all over the world The Southern Upland Way is a 212 mile walk from Portpatrick, passing just south of Stranraer, heading east to Cockburnspath with picturesq