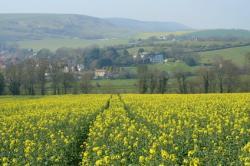 The South Downs Way (SDW) is a long-distance footpath that traverses the chalk hills, the South Downs , and runs for a distance of approximately 100 miles from Eastbourne to Winchester . Despite never being that far away from some of the largest centres of population in southern England, the SDW nevertheless offers a chance to escape into rural tranquility. It is also famous for the several fine country pubs to be found along its route! The 100 mile path is usually reckoned to be an eight day walk, at a comfortable pace. Anyone taking to the SDW is recommended to take a good route map, no matter how well they know the path. Do also make sure you go properly equipped and dressed; and remember these ales can be strong, so dont drink too much if youve got further to walk that day!

This guide follows the South Downs Way in the time-honoured route that pilgrims would have taken in the middle ages, that is going west from Eastbourne and heading to the ancient former English capital, Winchester, to end the trek. The start of the trail presents the walker with a decision as there are two routes here! One is a bridle-way that runs inland via the village of Jevington, the site of the church of St Andrews which dates back to Saxon times. The other is the official SDW which runs from Beachy Head along the line of the Seven Sisters chalk cliffs via Birling Gap , before tracing the course of the Cuckmere Valley. Both paths meet at Alfriston where the walker may want to pause at the excellent Sussex Ox , found just outside of the village on the Littlington- Wilmington road. The pub is near to the famous Long Man of Wilmington, a chalk figure carved into the downs. The Sussex Ox is a family-run freehouse thats well know locally for the quality of its ales, and also serves food for the hungry traveller.

Alfriston contains several pubs which include the 14th Century Smugglers Inn and a village shop. The George Inn there also has a very good reputation with the local real ale connoisseurs. Alfriston is also home to the thatched 14th Century Clergy House which was the first property to be purchased by the National Trust. The village makes a convenient place to rest up on the first night of the trip. Alfriston boasts excellent accommodation at places such as Deans Place Hotel on Seaford Road, or the historic Star Inn which dates from 1345 and is thus one of Englands oldest hostelries. From here the SDW heads towards Lewes . In nearby Firle , just east of Lewes, youll find the comfort of the 16th century Ram Inn , with its log fires and excellent food. The village of Rodmell is a little further along the trail as we head west and is the home of the Abergavenny Arms , another favourite ale pub complete with log fires to dry out walkers who get caught in out any wet weather.

Lewes itself is home of Harveys Beers , founded in 1790, making a quick detour into the town a must for many beer fans. If you decide to stay in the Lewes area the Newick Park Hotel & Country Estate is a good choice for accommodation for those seeking a little luxury along the way. After leaving Lewes you can rejoin the SDW to the west of Mount Harry, near the site of the 1264 Battle of Lewes . The SDW passes the Ditchling Beacon, which one of the major South Downs landmarks and then heads to Clayton, passing  Jack and Jill , the name given locally to the two windmills here.

The SDW passes along Devils Dyke after the windmills. Here the thirsty traveller might pause a while at the modern, spacious Devils Dyke Inn , although it is not the typical olde-worlde type pub that is so popular in these parts. Hard-core ale drinkers may prefer to take a detour away from the SDW to find the Shepherd and Dog pub in the village of Fulking. Or instead wait until the path takes them into Steyning - home of the good beer guide listed Chequer Inn . The nearby village of Bramber is home to the Old Tollgate , a beautiful privately owned hotel that boats comfortable rooms, a bar and home cooking.

If you tarried in Steyning then the next days walk should get you as far as Amberley , but only if you dont stay too long at the Frankland Arms in Washington where the SDW crosses the busy A24 trunk road. Food, ale and friendly service await you at the Frankland before you set off for the rest of the days walking. And if the afternoons effort leaves you thirsty again, then head for the Black Horse in Amberley where more quality ale (Harveys) and good food awaits! Amberley is also home to Amberley Castle where luxury accommodation greets the weary walker. From Amberley the SDW heads west towards the village of Cocking which, although it has the Moonlight Cottage Tearooms , no longer has a village pub. You may prefer, instead, to take a short detour and find the ancient Royal Oak at Hooksway which still draws its water from a deep well on the premises! A little further along is the village of South Harting which once marked the end of the SDW until it was extended to Winchester in 1989.

From South Harting to Winchester the SDW runs through some of the best scenery in Hampshire . Youll be able to celebrate finishing your walk of the SDW with a visit to the Black Boy in Winchester. Here you can sit on a sofa next to a stuffed monkey wearing a kilt, and thats what youll see before you drink their excellent and mainly locally sourced ales! Winchester is home to many hotels and B&Bs, such as the Hotel du Vin & Bistro which is housed in one of Southgate Streets fine 18th century Queen Anne buildings. Just outside Winchester youll find the elegant Lainston House Hotel at Sparsholt, or maybe you prefer the spa facilities on offer at the Marwell Hotel , Thompsons Lane. After all, what better way is there to ease away the aches and pains of your trek along the South Downs Way visiting its many wonderful country ale-houses?