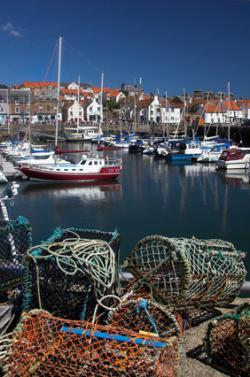 On The Fife Food Trail

Like those Japanese tourists in the Louvre who ignore everything but the Mona Lisa, too many visitors to Fife aim only for St Andrews and the golf . But the peninsula has far more to offer: some lovely beaches; beautiful little fishing ports; and nearly 5000 listed buildings including Ravenscraig Castle in Kirkaldy ; Dunfermline Abbey ; and Falkland Palace used by the Stuart kings as a hunting lodge from which to pursue wild boar, deer and game birds. That rich natural larder still remains (venison farmed in various places), backed now by some wonderful artisan producers of traditional and craft foods.
Fifes food riches were highlighted a couple of years ago by the so-called Fife Diet, an idea dreamt up by locals Mike and Karen Small from Burntisland : not a slimming regime, but the concept of eating just (or rather mainly) locally produced food: for freshness; to reduce food miles; for economy; and to support local producers. It raised some eyebrows, accordingly opening eyes to the vegetables, meats, fish, grains, cheeses and fruits available on your doorstep. Fife was a good place to launch the idea: with many fine producers not getting enough publicity.
There is a rich baking heritage in Scotland, and Fife is home to several traditional products, with Cupar noted for specialities like the Puggie Bun, sweet gingery dough encased by pastry; and Raggy Biscuits, old-fashioned plain but sweet biccies; and throughout the region you should hunt out Softies, locally made sugary buns; and Paving Stones whose name denotes their long thin shape, but misses their gingery sweetness.
With a long coast stretching from the Firth of Tay to the Firth of Forth , Fife has a wealth of little fishing ports, and the seafoods that are landed there are another avenue of foodie exploration. If that sounds like it might be a bit, well, poncy, it neednt be: one of the great destinations for fish lovers is the Anstruther Fish Bar in the East Neuk, the bottom corner of the peninsula: with a sit-down restaurant for the fastidious (or for rainy days) and a seating area outside it is famed for proper fish and chips with mushy peas. And unlike too much of Britains catch, much of the stuff landed in Fife stays there  there are lots of good quality fishmongers especially in the coastal towns if you are going self-catering and fancy something fishy: try Andersons Seafood in St Monans ; J.Hughes Seafood in Pittenweem ; or Deveron Shellfish in Crail among many others.
Fish restaurants abound in the region: Cellar Restaurant in Anstruther , or The Waterfront just along from the Fish Bar; or for what-it-says-on-the-tinness the Seafood Restaurant in St Andrews and St Monans.
Crabs are landed locally, but look out for Smelts: tasty little saltwater-fish landed in the Tay. A speciality of Newburgh , they are smoked, pickled, or simply fried, and go nicely with a glass of local beer.
The hotel sector in Fife has some noted eateries too, if you feel like taking it easy and strolling from room to table: Rufflets Country House Hotel in St Andrews has a brasserie and their renowned Terrace Restaurant; Fernie Castle Hotel in Cupar provides modern Scottish cuisine in a 14th century castle; the Old Manor Country House Hotel in St Andrews is known for its local beef; Dunnikier House Hotel in Kirkaldy has an award-winning restaurant, and a fine collection of whiskies.
And talking of whiskies... Fife only recently entered the whisky world with a micro-distillery which began operating in 2005: the delightfully-named Daftmill Distillery near Cupar has not yet launched its products, and is only open for visits by special arrangement, but some of us are happy to wait for a taste in 2015 when they reckon their dram will be ready.
But dont wait till 2015 to visit the region. A walk on the sands to whet the appetite; a stroll in the country to get a thirst up: justification for getting outside some great Scottish provender.