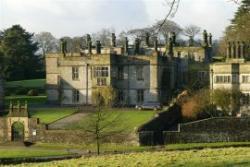 Well-Dressing in the Peak District

The Peak District is beautiful enough to make additional attractions almost superfluous, but it is good to have a specific goal for a trip. The thriving tradition of well-dressing in the area is photogenic and fascinating, and for box-tickers of British life something that has to be experienced at least once. As with almost every folk custom there are claims that well-dressing dates back to pagan times, and perhaps in one or two cases it is truly ancient  Tissington and Eyam can make that claim with some justification. But it seems that a more down-to-earth reason sparked the growth of the custom in the late 18th and early 19th centuries  the provision of clean water, even of piped water. People celebrated this boon by producing elaborate decorations for wells and reportedly even for communal taps, though this echoed the penchant of our ancestors for decorating holy wells. Such decoration now takes a standard form, wooden boards with a raised edge creating a wide but shallow trough are filled with sticky clay, and have multitudes of nails banged through from the reverse side. An outline design on paper is overlaid on this, then the main lines drawn by sticking on little pine cones, dried seeds and suchlike. The spaces between are then filled with colourful petals, whole flower-heads, leaves, heathers and mosses. To say the least this is not a quick process, and part of a trip should include visiting a work in progress  a good source for information on timing and access is www.welldressing.com.
This is largely a summer custom. May sees the season begin, continuing through to August in some places  given the nature of the decorations the displays are rather ephemeral, each village enjoying its three or four days of splendour. Visit the Peaks anytime from May to August and your hotel or B&B should be able to direct you to a nearby event.
Tissington is the most famous well-dressing village, its festival centred on Holy Thursday: if you fancy self-catering, Nurses Cottage in the village is convenient. Just five minutes drive away Ashbourne has numerous options including the Izaak Walton Hotel for that traditional feel; the more modern Miraj Hotel and Leisure Club ; or a proper rural B&B like Turlow Bank in the countryside at Hognaston.
Youlgreave (sometimes Youlgrave) is roughly equidistant from Bakewell and Matlock , both lovely places which have their own well-dressing celebrations too - and for goodness sake forget the diet and try a Bakewell Tart while you are there: in Matlock Information Britain has 35 places to stay, including the Whitworth Park Hotel , the Red House Country Hotel , and the intriguing Old Lock-Up , which once held prisoners; in Bakewell there are 18 more, among them the famous Rutland Arms Hotel where the famous pud originated; Monsal Head Hotel ; and a couple of miles west the Ashford Arms . The well-dressing in Youlgr(e)ave takes place in late June.
Tideswell, five or six miles east of Buxton , is one of the best-known of the well-dressing centres. Combine a trip to its June observance of the tradition with a stay among the delights of that old spa town  generally plays and concerts at Buxton Opera House , the beautiful park, and the waters, a taste for which I am yet to acquire though some swear by them. Information Britain has 19 places to stay there, including the Old Hall Hotel where youll walk in the footsteps of Mary Queen of Scots ; the splendours of the Palace Hotel ; and the Buckingham , famous for its beers.
Eyam is one of the last villages to decorate its wells, generally at the end of August. In and around the village itself youll find the Bulls Head Inn  this is good beer country, another reason to visit  and cottages both independent and via Welcome Cottages if you fancy booking somewhere for your own home-from-home. Of course well-dressing is not the only reason to visit Eyam  the museum and other sites tell the moving story of the selfless reaction of villagers to an outbreak of plague in 1665.
As tourism in the area grew in the 19th century and through the early 20th century more and more villages in the Peak District adopted the idea of well-dressing, so in addition to the aforementioned places the tradition is kept by Elton, Pilsley, Little Longstone, Taddington, and many more. The scenery is magnificent; the walking is great; and other attractions like the numerous National Trust properties and nature reserves mean youll have plenty to do besides taking in the well-dressing sites.