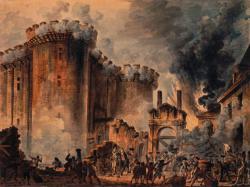 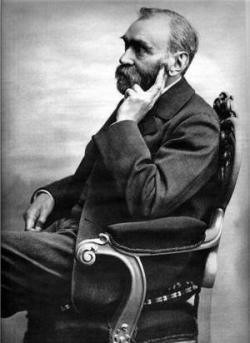 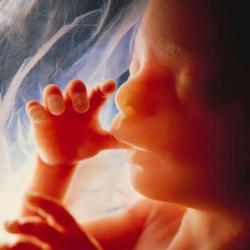 Storming of the Bastille

In so many revolutions there comes a point of symbolic importance where the power of the government is seen to have ebbed away, that point often coinciding with the refusal or failure of troops to fire upon the revolutionaries. Recently this was the case in Egypt; when the Soviet Union ended it happened as demonstrations took place in Moscow; and as the Berlin Wall was finally rushed East German troops stood by without firing a shot. Such too was the case when the Bastille, a symbol of the ancient regime, fell to the mob.
Louis XVIs power had already taken two body blows: the nobility had refused him the fiscal support that might have saved France from the economic difficulties foreign adventures had brought it; and the middle classes in mid-June had formed the National Assembly, initially to create a constitution for the country but clear evidence that the status quo could no longer hold, the pseudo-Parliament of the States General dominated by the monarchy and the nobility consigned to history.
On the morning of July 14 the mob or the revolutionaries depending on your viewpoint had seized large quantities of muskets, but little or no gunpowder, at Les Invalides. A great store of powder existed at the Bastille, the fortress-arsenal-prison that, sitting in the centre of Paris, was both an inviting target and a hated icon of royal power.
The Bastilles governor de Launay at first fought off the attackers, though they were about 1000 strong and he had just 82 soldiers invalided out of normal duty, and 32 Swiss grenadiers. De Launay, however, had 30 artillery pieces on the walls. When after some struggles negotiations were underway the crowd gained the outer courtyard, and though fighting continued the fortress was by late afternoon lost, de Launay surrendering even though his conditions to do so had been refused. De Launay, under arrest, was beaten and then bayoneted to death and his head put on a pike. The prisoners and powder were both liberated.
While de Launay was fighting off the mob large numbers of royal troops were stationed at the Champ de Mars, but for whatever reason their commanders failed to engage with the revolutionaries. The French Revolution had begun its violent phase, and soon the spirit of revolt would spread through the country and eventually through much of Europe . De Launays was far from the last head to roll, the king himself guillotined four years later.