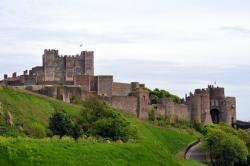 The Cinque Ports  Hastings, New Romney, Hythe, Dover and Sandwich  reach round the coastline of Englands southeast corner, but they also reach back deep into our history. This was where we feared, endured and defeated invasions: the five ports in medieval days given special legal and tax privileges in return for a duty to provide ships and men in times of war. Heritage trail has rather dry and serious connotations, but along the route that takes visitors from Hastings at one end to Sandwich at the other there are many attractions and entertainments beyond the historical, so an exploration of our past can be leavened with lighter activities. Hastings  or rather nearby Battle - was of course where the Normans effectively won England, and the castle they later built and that saw further French attacks in the 14th century still dominates the skyline. The port it defended silted up more than 700 years ago, but fishing boats are still put to sea from the beach and its restaurants enjoy the fleets catch. A stroll around the narrow streets and alleys of the old town here is a simple way to pass an hour or so; and dont miss riding the East Hill Funicular. Some of the town will already be familiar to viewers of Foyles War , telling stories set in our more recent history. The dangers of the sea are investigated in the Shipwreck Heritage Centre ; its simple pleasures easily enjoyed by kids and adults on Pelham Beach . From Hastings the trail travels west, through Winchelsea and Rye (both linked with the Cinque Ports and part of its wider association) to New Romney, where time has moved the sea a mile distant to Littlestone, one of the nicest beaches in the region. New Romney is a small town now, though it once like the other four Cinque Ports provided a significant part of our navy, and was the unofficial capital of the confederation. This is a good place to park the car or bike and walk around the town trail, breathing in the history as you go. On to Hythe that like Hastings long ago lost its natural port. If you take the A259 coastal road you will pass several of the Martello Towers built when Britain faced another invasion threat, from Napoleon . At Hythe you should not omit one of the great little railway journeys of the world, taking you back on yourself on the narrow gauge Romney, Hythe and Dymchurch Railway stretching all the way to the strangely beautiful Dungeness shoreline. You may consider making Hythe a base given that trip, and another possibility, cycling or walking the footpath from Hythe all the way to Winchelsea along another defence against invasion, the Royal Military Canal, a jaunt of more than 20 miles. The towns history is explained in its Local History Room , after which a break for the kids may be in order  take them to Port Lympne Wild Animal Park and sneak a peek at Lympne Castle while youre at it. Next Cinque Port of call, and this time still one of the worlds most important harbours, is Dover . A trip to Dover Castle towering over the White cliffs opens several chapters in our national history: there are the remains of a Roman lighthouse; a Saxon church, and of course the Norman fortification, but less well-known perhaps the tunnels built when Britain faced the Nazi threat. Dover has another Roman site that should not be missed, its Painted House . Like millions of Britons every year you may be tempted to take a day trip to France from the continually busy ferry port, crossing the straits Caesar and his army braved in less secure vessels two millennia ago. Last of the Cinque Ports is Sandwich , though for those keen to dig into the history of the institution a side-trip on the way is due, to Walmer Castle the residence of the Warden of the Cinque Ports. That post has been filled by some of our most famous Britons  the Duke of Wellington ; Pitt the Younger ; and Winston Churchill among them. Sandwich for amateur historian and sightseer alike is possibly the highlight of the trail, with more medieval buildings than it is possible to list here, some dating back to the 12th century, along with town walls that can be walked. Not to be missed are the Tudor Guildhall , now housing a museum, and to the north the Roman Richborough Fort . Or for a break from history take in the Salutation , a house in the town itself famed for its Lutyens and Jekyll gardens, for a stroll and a well-deserved cup of tea. Naturally there are more sights along the route from Hastings to Sandwich that you will discover by taking a little time to stop and stare  and maybe sip a little too, given Kent is one of the great brewing areas of Britain, and it and Sussex now have some award-winning wineries too.