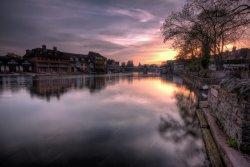 In the Wake of Jerome K Jerome

All right thinking people, i.e. those who share my opinions, agree that Jerome Klapka Jeromes 1889 novel is one of the funniest ever written. Relating the adventures of three companions (to say nothing of the dog) rowing from Kingston to Pangbourne , it is, however, a travelogue as well as a comic masterpiece.
Admirers of the work make pilgrimages along the identical route, able to visit every single pub and hotel mentioned in the text. But even for those foolish enough to be indifferent to J, Harris and Georges travails, it makes a very pleasant journey, to be honest at times a literary pub crawl.
To be faithful to the original you should start at Waterloo Station, but those living outside London may choose to forego that pleasure and make directly for Kingston-on-Thames. An even more significant decision is boat or car? With a car you can move from town to town as listed by the author, but you would be missing out on the scenery and the sheer joy of boating  rain, shirts overboard and lost tin-openers included. Given the pull is against the river perhaps hiring a motor-vessel of some sort is in order, with an occasional night in one of the hostelries along the way rather than the camping skiff of the novel.
Kingston still possesses by its Guildhall the coronation stone mentioned by Jerome , though the country town when he was writing is now a suburb of the capital, and a rather posh one with some excellent restaurants and pubs ; you may also prefer to source your provisions there rather than bringing them along as the literary crew did, Kingston being a noted shopping centre these days.
Perhaps the books most famous description is of the disastrous visit to Hampton Court s 17th century maze by Harris. One of the finest buildings in Britain the palace is not to be missed. Then on to Molesey Lock, with a peek at Hampton Church , before making a stop at Kempton Park where they dallied under the willows  the place already by then a racecourse.
Walton is next along the rivers course, where as J points out Caesar stayed. If you have chosen to travel by car, Walton provides the opportunity to take to the river for a short time, boat-trips running to Hampton Court from there. Further upstream you will come to Oatlands Park , the house mentioned in the novel now a hotel. If you have any latecomers it would be fitting for them to join at Weybridge , as George does. Foolishly they push straight on to Runnymede rather than taking advantage of Weybridges facilities.
At Runnymede , a particularly beautiful spot, you can take the air and consider two historical associations  the signing of Magna Carta (or Charta as the book spells it), and the little piece of America there, the memorial to JFK. The Hotel and Spa there would make another rest stop for the weary.
Past Old Windsor and Datchet , where previously the three had visited various hostelries to find one with honeysuckle over door, and eventually found everywhere full and had to stay at a cottage  a salutary lesson to book in advance! - you arrive at Maidenhead . J is rather snooty about the town, calling it snobby, though he is favourable about Cliveden  the house another now serving as a hotel, and Monkey Island where again they would have seen the country house that now is a hotel.
Marlow received Jeromes approval in the book  he gives a glowing report of the town and of the country around it for a walk  and in life  he lived there in his in old age. It is though in Marlow that Montmorency has his embarrassing episode with a particularly tough cat.
The Abbey at Bisham that Jerome raves about is now the National Sports Centre, but nearby Shiplake with its lovely church is little changed. At Sonning , where the group takes another walk, Jerome recommends The Bull for those staying in the place, the 17th century inn still there today.
Past Reading and From Mapledurham up to Streatley it is glorious. Another Bull , at Streatley, was a lunch stop for the three men, so it would be churlish not to follow suit. At Wallingford they hear various tall-tales about a trout in a glass case during their visit to what is only referred to as a waterside inn  perhaps the Kingfisher ?
And finally to Oxford . Jerome and his companions spend a couple of pleasant days there before the desire to return to the metropolis overcomes them. The choice of hotels and restaurants , pubs and inns is extensive, and there can be few city centres more beautiful. They were lured back to London early by the bright lights, but you may choose to complete their intended route at Pangbourne, pretty enough to have attracted Kenneth Grahame in his retirement, and supposedly the inspiration for E.H. Shepard s drawings for Wind in the Willows.