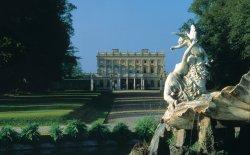 With the M40 cutting through the south western corner of the county, the M25 grazing its southeast edge, and the M1 thoughtfully running parallel to its eastern border, Buckinghamshire is an area easy to reach by car. But once off the modern trunk roads the place offers visitors an easy and thoroughly enjoyable way to explore our past.
Buckinghamshire is a treasure trove of National Trust properties. Touring a selection of these offers snapshots of different periods of our history; of important figures in it; and of the lives of ordinary people in such times. Not that such a tour would merely be a series of history lessons: from my recollection no beer was served even in A level history classes, whereas the Kings Head in Aylesbury which belongs to the NT does just that still.
Aylesbury  and unless vegetarian you have to try the duck while in the area - would be a good base for touring the county, with plenty of accommodation options listed by Information Britain. One to the west of Aylesbury, The Five Arrows , is intimately linked with surely the grandest Trust house in the county, Waddesdon Manor , as it was built by the Rothschilds to house workmen building the ornate Loire chateau-style edifice which tells a story of Victorian power and wealth  and perhaps how money does not buy taste though it does purchase quantity.
Coombe Hill, just south of the town, offers two views together: one is another snapshot of Victorian life, a reminder of the Boer War which its monument commemorates; and a vista that takes in the Chilterns in three directions and the lower ground to the north.
Three other properties in the county give breadth to that vision of history. To the south just above High Wycombe stands Hughenden Manor , once the home of Benjamin Disraeli though its roots go back deep into Norman times. So do those of Hartwell House a mere three miles from Aylesbury, though the link with that age is made more intimate in that it was the home of one of William the Conqueror s illegitimate sons. The third such place, Cliveden , almost overawes such is the grandeur it projects: once the home of Nancy Astor it was at the heart of one strand of British political life in the early 20th century; but its splendour is now open to more than the political class  these days it is used as a 5-star hotel. It had a rather less glorious entanglement with state affairs in the 1950s, some of the events in the Profumo scandal taking place there.
But history is not just the story of the great and the good and the great and the morally corrupt. It is founded on the many rather than the privileged few. Again Buckinghamshire can provide the bricks and mortar, and in the case of one site the wicker and wire, that create a doorway to our past. The Kings Head already cited is a magnificent example of an ancient inn, its coaching days another commentary on how Britain developed; no great distance away too is 15th century Long Crendon Courthouse , evidently once used for that purpose, but also in its time a wool-store and a poor house.
The wicker and wire mentioned above are at a fascinating relic of the country past, the Boarstall Duck Decoy in a village between Oxford and Aylesbury. Our ancestors used what were effectively giant funnels to capture ducks without the need for and mess from firearms, and this is one of the few remaining examples.
While it is a living village, Bradenham in the Chilterns is owned and managed by the National Trust to maintain one particular image of English rural life, which naturally enough includes a village pub, The Red Lion .
For centuries the local corn mill was one of the great foci of rural life, and between Ivinghoe and Pitstone the NT owns a windmill that has been in existence since at least 1627, restored to be capable of grinding wheat again.
There is of course far more on offer to those taking a break in Buckinghamshire. Still on the history track there is the Old Gaol Museum in Buckingham ; or another museum that may appeal to the kids, that dedicated to Roald Dahl in Great Missenden. Milton Keynes is brilliant for shopping ; or if you want to stretch your legs  and arms  there is a Go Ape near Wendover . And the entire county is renowned for country pubs if that is your thing.
To avoid disappointment as the phrase goes, please do check opening times before setting out to visit a particular attraction or property; but even if the intended spot is closed, others will be open or available to view from outside.