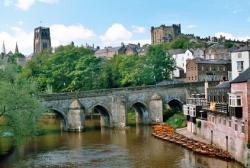 The vicissitudes of history have left Britain with a pleasant legacy of certain cities once far more significant in political, economic and population terms than they are today. Durham perhaps has the best of both worlds, an astoundingly compact historic city centre but with around 80,000 residents and the vibrancy of a collegiate university.
Durham is an easy spot to get to, with a mainline rail station a short stroll from the centre, and served by junctions 61 and 62 of the A1(M). Nominally it has its own airport too, though that is a good half hours drive distant. Those taking a short break in Durham should definitely consider letting the train take the strain, given the pedestrian-friendly centre  it was after all Durham which imposed the first congestion charge in this country.
The compactness and topography of the city is hinted at by its name, derived from Dun-Holm, the Saxon for hill island. Durhams centre is a peninsula bounded on three sides by the River Wear : walkers have four bridges onto this; cars are funnelled through one narrow route, the charming Sadler Street. For centuries the place was legally self-contained too, its Prince Bishops theoretically until 1836 allowed to maintain an army and mint their own coinage.
At its widest the tongue of land is about 300 yards across; and in length roughly half a mile. But within that space are more than 500 listed buildings, headed by the two structures comprising one of the original British UNESCO World Heritage sites, Durham Cathedral and Durham Castle.
Expect to face some inclines: the spot, already settled 3000 years previously, grew in importance when Lindisfarne monks seeking refuge from Viking predations arrived in 995AD, attracted to stay by the easily defended hill. The castle and cathedral are however Norman , from William the Conqueror s reign. The Cathedrals sanctuary knocker brings history alive in an object; Bede s tomb likewise. Durham Castle is a thing of beauty, but it was also fit for purpose, the only major castle in the North never taken by Scottish marauders.
The citys Heritage Centre and majority of Durham Universitys buildings are to be found on the eastern side of the peninsula, though the first college, University, sits between castle and cathedral. The Archaeology Museum is on the opposite side, housed in an old fulling mill.
If after all that culture you need some retail therapy, the Gates shopping Centre is west over the river, and the Prince Bishops Centre just north, though within the peninsula there are some interesting independent shops . The Market Place looks older than it actually is, being largely Victorian , but its elegant stone paviours match the feel of the ancient city perfectly.
With a relatively affluent market of academics, visitors and tourists to hand the centre has no shortage of restaurants either: Information Britain lists more than enough to fuel a weekend break, their numbers matched by the pubs and inns dotting the cityscape  this is a student city after all. Likewise the site has a wealth of information on hotels in the city  make your break one from the car as well as work and search out a place close to the heart of things, perhaps by the river.
Between Easter and October a river cruise takes sightseers around the Wear, offering an easy-on-the-feet way of taking in some great vistas: dont forget the camera as it provides some splendid opportunities to capture the dramatic skyline.
The centre is blessed with green spaces, and fine trees are part of that skyline punctuated by the great buildings; if you yearn for more exotic greenery the Universitys Botanical Gardens to the south of the city fit the bill nicely; or to the north you can combine history and the green with a trip to Crook Hall , parts of which date from medieval times, though with Georgian elements among others, and lovely gardens. There are other attractions beyond the central area, including the Museum of Oriental Art to the south west, famed for its Chinese and Egyptian collections.
When you get to Durham, however, you may feel tempted not to stray too far from the centre, to soak up the atmosphere, stroll around spotting architectural gems, and of course enjoy the hospitality.