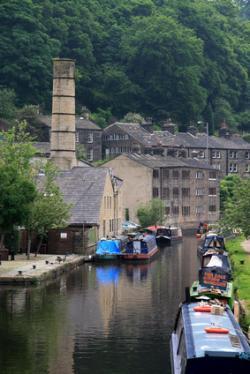 Ah! The Upper Calder Valley, the real and unreal West Yorkshire at one and the same time. From Sowerby Bridge hard by Halifax via Luddendenfoot, Mytholmroyd and Hebden Bridge to Todmorden, the narrow and often steep-sided valley winds westward. The tricky terrain helps maintain the look of the area, land for new development decidedly restricted. But the old and the new, even New Age, mingle healthily here.
Even getting there can be enjoyable: ok, its a short drive from junction 22 of the M62, or junction 10 of the M65; but happily it has retained its position on the railways, served by trains between Leeds and Manchester Victoria. And from the very moment of getting off the train you may notice how the area is keen to differentiate itself: Hebden Bridges station is in the old Lancashire and Yorkshire Railway colours; and Mytholmroyds celebrates the most famous tale  The Iron Man  of its most famous son, Ted Hughes . The really adventurous may choose to use the canal system, as the much restored Rochdale Canal flows through the valley  Tuel Lock here the deepest in the land.
What marks the Calder Valley as a different sort of trip destination is the atmosphere and quirkiness of Hebden Bridge : in the last third of the 20th century the town, with then cheap housing, easy access to moorland walks, and the relative proximity of many cities and sizeable towns, attracted a mixed and creative crowd that embraced New Age life-stylers, yuppies, artists, lesbians and academics. With them came shops a million miles from identikit malls; cafes, restaurants, and accommodation like Bar Place and Croft Mill .
The town managed the tough task of retaining much of its old character while that influx occurred, so there are still proper pubs like the Fox and Goose , Hole in the Wall and Greenwood , and a 17th century coaching inn The White Lion .
A stroll around the town will take in the old stone packhorse bridge, and if you have the puff the famous over-and-under houses built on the hillside, where generally the lower two stories face outward as one house, with two or three more above them facing in as another. And with yet more puff you may want to tackle a walk on the beautiful Hardcastle Crags , though the towpaths in the valley bottom are far easier going. Whether you do your treks in clogs from Walkleys Mill is up to you. For lovers of golf there is a course that will certainly be a different experience for most golfers, using the moorland terrain in its 9-holes-twice.
The other towns in the valley have to be visited too: Todmorden is actually bigger than the better-known Hebden Bridge, with a fine market accordingly as has Sowerby Bridge; Mytholmroyd with its Ted Hughes connection draws many of his fans, some of whom will make it to the excellent pubs in Cragg Vale nearby  not the ideal place for cyclists perhaps given its continuous upward slope over more than 5 miles as you head southwards.
Realisation that the canal is a major tourist resource has meant places like Sowerby Bridges wharf, flower-bedecked and one of many places in the town to explore why it has a growing reputation with foodies, have been sensitively re-developed. Fielden Wharf in Todmorden likewise. Sowerby Bridge, by the way, has more pubs than its population would seem to merit, and some excellent restaurants , though Tod probably outnumbers them in that regard.
Above the valley there are many marked moorland walks  the original road wended its way across the hills here as the valley until the 19th century was too marshy for road-building  many of them very helpfully marked. The moors are dotted with reservoirs and mill-lodges, adding the lure of water to the open countryside.
Part of the areas special character comes from the customs that have been kept up generation after generation. At Easter Calder High School puts on the Midgley Pace Egg Play . April sees the annual Dock Pudding festival in Mytholmroyd. And every September Sowerby Bridge observes the tradition of rush-bearing .
If you do feel the need to quit the valley there are plenty of attractions close by including the surprising Towneley House near Burnley; Keighley and Worth Valley Railway ; the fleshpots (and culture) of Manchester, Leeds and Bradford ; and Haworth for a Bronte pilgrimage . But we guess youll find enough in Upper Calder to keep you occupied for the length of your break.