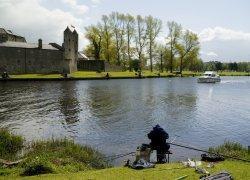 Just a glance at the map of Fermanagh reveals why it is known as Irelands Lake District. The huge expanses of Lower and Upper Lough Erne (18 and 10 miles long respectively) cut across the centre of the county very roughly north-west south-east in two splashes of blue. But look closer and youll see the border with the Republic includes stretches of Lough Melvin and Lough Macnean. And dotted either side of their bigger brothers smaller waters like Quivvy Lough, Drumderg Lough, Lough Bradan and Drumgay Lough abound. There are dozens of them.

For obvious reasons the areas attractions were off our radar for years. That happily is no longer the case. Its worth visiting Fermanagh simply for the beauty of the place, with vast tracts of forest and the hills that run either side of the Loughs and more or less parallel to them. But there are plenty of things you can be doing while admiring the scenery. All that water makes this a paradise for the angler and the sailor, along with those who enjoy cruising in narrow-boats, wind-surfing, water-skiing (it has hosted the waterskiing world cup before now), jet-skiing, scuba diving and canoeing.

The fishing has been renowned for centuries, Charlie Chaplin a visitor in his day (he stayed at Garrison on Lough Melvin). You will need a licence from the Northern Ireland Department of Culture Arts and Leisure whether you have one for fishing on the mainland or not, and a permit, but for a week or two that wont break the bank and can be done online via www.nidirect.gov.uk/angling. This is great game fishing territory, the season running from March 1 to September 30, with boat fishing the traditional method, especially trolling. There are plenty of stocked waters (some open year-round), but also three intriguing local trout species, the Sonaghan, Ferox and Gillaroo to be found.

For the coarse fisher there is no close season here, the pike, bream, perch and tench among many other species offering a challenge spring, summer, autumn and winter.

With all that lovely open water its no surprise that Fermanagh has a wealth of activity centres and training schools offering sailing tuition for beginners and the less-experienced, Lower Lough Erne the biggest draw but with its twin as a rival  in Lisnaskea for example - and with Lough Melvin not far behind. There are numerous marinas  the one at Kesh pretty sizeable - and innumerable moorings to delight the old sailing hand into hiring a boat and tacking off to explore. The 365 islands claimed by the locals on the two Erne waters (or 154 if you have not kissed the Blarney Stone ) will give the kids the feeling they are discovering new lands, and some of them like Devenish Island with its tower and monastic site, and Boa with its pagan Janus idols will stick in adult memories. Prices to hire boats may be a pleasant surprise to anyone who has done similar trips in the Cumbrian Lake District.

Sail not your thing? Then why not hire a motor-cruiser, narrow-boat or even a Dutch-style barge? If you do so on Lough Erne, once you have done your sightseeing there you can use the Shannon-Erne Waterway, the longest inland cruising system in Europe, to head into Southern Ireland. Tour boats are another option for exploring the lakes with someone else doing the hard work, with departures for example from Killedeas and Enniskillen . Or push the (flying-) boat out and take a trip in a seaplane from the little airport at St Angelo near Ballycassidy.

If you need a bit of a rest from the water and the wilds, though there is no guarantee you wont still have the wet-stuff in sight, Enniskillen the county town is the place to head for, a rural market town built on an island at the head of Lower Lough Erne, guarded by a lovely old castle and known for its eateries (and a few well-respected drinkeries to boot). Even underground the water will still intrude  the Marble Arch Caves complex south of Lough Macnean Lower has rivers and waterfalls deep beneath the earth. For some variety how about the local golf courses ? Not that you are guaranteed to keep your ball out of the water on some of them.

The local tourist authorities are to their credit striving to make holidaying in Fermanagh an Eco-tourism experience, which maybe ticks another box for some of us. Many forest walks and cycling trails cater for the energetic Eco-tourist here.

You need a week to even start to scratch the surface of the waters here, and preferably two. And we are betting that after your first youll feel the need for a return visit. Or several.