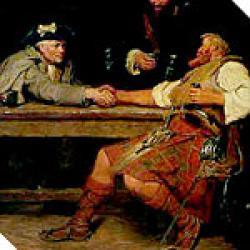 The Auld Alliance between Scotland and France was forged amidst the threat to both nations sovereignty posed by an ambitious and powerful England.

In 1294, King Edward I of England had declared war on France; the beleaguered King Philip IV The Fair needed an ally. Scotland too, were in need of diplomatic clout and, all too conscious of Englands expansive politics, an alliance with the French would help haul Scotland out of the political isolation that John Balliols reign had presided over. The Auld Alliance was a succession of treaties between two culturally contrasting nations; awkward partners in their hour of need.

These were quite desperate times for both the French and the Scots; with France subject to an English invasion, and John Balliols authority eroding in Scotland  as a landowner in England, Edward I had already established a feudal ascendency over Balliol. How could a Scottish ruler accept his role as vassal to an English king and be a worthy guardian of Scottish affairs? Balliol was placed under wardship, his feudal debt to King Edward needed careful handling from Scottish noblemen.

It was crucial that any treaty with the French would hinge around their interest in seeing Scotland survive as a sovereign nation. The French recognised Scotlands strategic position as an opportunity for war by proxy; the Scots were better placed to engage in any military aggression against England. It was ironic: a treaty signed in peace, would be digested as a declaration of war against the English. There would be trouble ahead.

The first treaty was signed in Paris, a marriage was arranged between Edward Balliol, Johns son and heir, and Jeanne de Valois, King Philips niece. One of the most intriguing dynamics in this relationship between the two countries was that the benefits of association were rarely meted out equally; the French always had more to gain from the alliance. The Scots courted more peril from pooling their strategic goals with the French.

The first of such perils was not slow in arriving; the 1296 Scotland felt the full force of King Edwards wrath as the Wars of Scottish Independence had begun. With no help from Paris, Scotland were discovering that the alliance evaporated in the heat of battle. John Balliol was seized by the English. Scotland were reeling but not finished; they had their victories. The Battle of Stirling Bridge saw Andrew de Moray and William Wallace repel Englands calvary. And William Wallace became Guardian of Scotland in 1298. A Scottish summer would have lasted longer than the Paris treaty; King Philip remarkably made his peace with England, Wallace would be defeated at Falkirk .

The French endured their own defeats; the Battle of the Golden Spurs in 1302 saw a bloodied King Philip lose his heart for battle, siring a more permanent peace with England, and Balliol would have no French saviour. Less than a decade had passed, the Treaty of Paris was dissolved; it was the English who had treaties with the French. The Scots were isolated again.

Robert The Bruce was now King of Scotland, but he did not enjoy the support of the nobility: his slaying of John The Red Comyn created many enemies amongst Balliols supporters. Edward II was now on the throne in England and an uncomfortable period of peace ensued. Bruce was a man who wanted to cement his dynasty; his son David was still an infant, both Scottish nobility and Edward II did not recognise Bruce as king. Edward Balliol was now a man and both Scottish noblemen and King Edward II would seek his ascension to the throne. The alliance was rekindled by the Treaty of Corbeil in 1326: King Charles IV needed an ally in the face of another English invasion. Bruce sought approval. Again, the French had more to gain; in light of any war with England, Scotland pledged troops and military support, France aid and counsel.

In the 14th Century, the only constant was change; Edward Balliol was King of Scots, but only just, and David II , son of Bruce was exiled in France. The Bruce cause wouldnt yield, and King Philip VI was buttressing it with troops and diplomacy. For the first time, the French were more than holding their side of the bargain. With the promise of 20,000 soldiers to help the Scots, gathering his fleet in the English Channel, King Philip had poked the tiger. Scotland were spared; France would suffer.

By 1337 The Hundred Years War had begun, David had returned to Scotland and the flighty nature of previous treaties would be supplanted by a more tangible alliance. The Hundred Years War was a boon to the Scottish economy, and the principal export was infantry, a mercenary army. Scottish soldiers could earn a pretty penny and level scores with the English. But it was not always to the Scots advantage. Catastrophic defeats at Flodden and Neville Cross were needless, David was seized at Neville Cross. Thankfully, Edward III was not as politically ruthless as he was greedy, France and Scotland survived.

Peace would not last. After Edward IIIs death in 1377, Scotland and France, bound by the Treaty of Vincennes, would plan war with England. 1385 would see the arrival of 2,000 French soldiers to Leith . But even before the English were engaged, squabbles would stretch the alliance to breaking point. The squalor in Scotland was abhorrent to the French troops; relations between the nations were infinitely more cordial with a body of water between them.

After the routing at Agincourt in 1415, the French were again in need of Scottish soldiers. The Scots answered the call of the Dauphin and an army, thousands-strong, would defeat the English at Bauge, killing the Duke of Clarence. Although Scotlands mercenary army was slain at Verneuil in 1424, theyd repelled the English, France regrouped.

Prior to the 16th Century, the Auld Alliance was all about survival; its Anglo-centric scope would melt though when the need for military cooperation abated. Reformation-era Scotland cosied up with Protestant England. Relations between the two nations hadnt dried up wholly; the wine trade which had resulted from the alliance was still in rude health. The relationship with the French also exhibited itself in Scotlands culture, with the French influencing Scottish architecture. It may never have been a square deal, but the Auld Alliance was a remarkable association, enduring through war and peace.