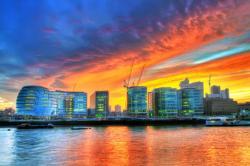 What to do once youve done the London Eye, Harrods, the London Dungeon, Tussauds and the Tower, along with Trafalgar Square, Buckingham Palace, the British Museum and Big Ben? How about exploring the quirkier side of the capital? Not only will you find the decidedly different, but many of these attractions are free, and most will involve no queuing at all.
It has to be said that simply sitting sipping coffee with a view of the street in many districts will provide you with a parade of human quirk. But for the architectural, historical, mystical, phantasmagorical and indeed several other things ending in al, read on.
London is famed for its museums , some household names worldwide. But wed like to suggest a few of the lesser-known gems of the curators art. Theres odd in the unexpected sense at places like the Benjamin Franklin House in Westminster. Odd in fiction becoming reality sense in the Sherlock Holmes Museum at (where else?) 221b Baker Street. Odd in the topic sense with places like the Fan Museum in Greenwich, Twinings Tea Museum in the Strand, the Hunterian Museum of Surgery in Lincolns Inn Fields, and the British Dental Association Museum in Wimpole Street. Odd in the wonderful survival sense with the Chelsea Physic Garden , or the Shirley Windmill in Croydon.
Every year millions flock to London for the shopping, for obvious reasons heading for Oxford Street and Mayfair among other centres. But for the delightfully different we offer a short list of suggestions, most institutions in their own right as well as very special emporia. Why not have an umbrella made to measure at James Smith & Sons in Holborn; or a hat at the celebrated Locks in St Jamess ? There is a world of (highest quality) choice on offer at the Burlington Arcade, but this fits the quirky remit in particular because it has its own traditionally-dressed police force, the Beadles , who keep buskers and other inconsiderates at bay. Two stores on Shaftesbury Avenue merit inclusion in our list: yacht chandlery Arthur Beale , simply because central London seems an odd location for such sales; and Forbidden Planet , the capitals biggest sci-fi outlet, heaven for Sheldon. And lastly Mysteries in Covent Garden, a haven for the pagan.
Crossing the Thames is part of any trip to the Smoke, generally via the Millennium (brilliant), London or maybe Westminster Bridge. We have other ideas for you. Take a free ferry  yes, free. Woolwich Ferry doesnt charge for foot passengers or cars. Alternatively, walk beneath the Thames via the Greenwich Foot Tunnel to the Isle of Dogs and Docklands , accessed through elegant glazed domes which cover the spiral stairs down to the 370m tunnel. A rather shorter crossing but with magical engineering is to be found at Paddington Basin, where inspirational designer Thomas Heatherwick created his curling bridge: kids will love the thing, and adults be amazed.
After all that perambulating you deserve a pint, with plenty of picaresque pubs to pick from. If ghoulies and ghosties grab you youre in for a great treat: The Worlds End in Camden High Street is said to be haunted by Old Mother Redcap ; The Grenadier in Belgravia sees a spectral subaltern every September; and Wappings Town of Ramsgate pub has none other than Judge Jeffreys as a regular. Not haunted but commemorating the dead is The Widows Son in Bow, where youll see hot-cross buns, some black with age, held in a net attached to the ceiling.
Much of Londons architecture is iconic, but it does quirky too: morphologically quirky like the Templars round church in Lincolns Inn Fields. Theres dimensionally quirky to be found too, for example The Thin House in Thurloe Square, Knightsbridge (itself a quirky word of course with six consonants in a row); and the two rivals for Londons smallest house, 10 Hyde Park Place, 3 6 wide but with two storeys, and the converted broom-cupboard opposite a href="/institutiondetail.php?id=54">Harrods that measures 5 6 by 11.
To end our quirky tour, the catch-all category of miscellaneous. Savoy Court of Savoy Hotel fame is the only street in Britain where vehicles are legally required to drive on the right. The ancient caves at Chislehurst on the outskirts of Greater London where your tour includes the Blitz and Druids. Sothebys, above whose door the oldest object in the City stands, an Egyptian piece more than 3500 years old. Londons most poignant traffic island  at the junction of Oxford Street, Marble Arch and the Edgware Road, where the observant will see a stone marking the spot on which Tyburns infamous gallows stood. And to end, Speakers Corner , which takes us back to the beginning and the quirky folk youll see if you just stop a while and look.
Happy and eccentric hunting. As ever, do wear comfy shoes.
If you have suggestions for additional quirky attractions or places in the capital, please let us know.