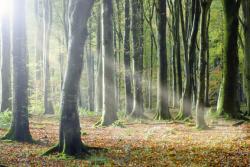 Get Active in the Forests of Dumfries and Galloway

Many of us south of the border and in Scotlands central belt automatically think of the Highlands if activity holidays are mentioned, foolishly ignoring Dumfries and Galloway. Foolishly as the extensive forests ancient and modern in that latter easily accessed region offer a multitude of opportunities to don walking boots, cycling gloves or riding helmets and get active.
The forests are not just for rushing through, however, with the more sedentary pleasures of astronomy and fishing catered for. Somewhere between sit some other fascinating possibilities like deer stalking and organised fungi hunting. And likewise not to be rushed rock-climbing and even with the right weather ice-climbing can be done here.
For fishing youll need to obtain permits and make sure you know the local rules and regulations, but a day on Loch Grannoch or Loch Enoch near Newton Stewart should satisfy the keenest of anglers, and there are innumerable other lochs, rivers and reservoirs to try: to name but three, Loch Dee, Palnure Burn and Spectacle Loch. To put the forest resource in perspective, Galloway Forest Park (GFP) which includes many of the rugged hills in the area covers 300 square miles, and it is just one of the forested areas available to you.
Fans of mountain-biking will surely have heard of the 7stanes , five of which are in the forests of Dumfries and Galloway. Youll find trails for beginners, granite trails, singletrack, and the occasional competition course, and plenty of places to hire bikes too.
The GFP is equally enticing for horse-riders as all its roads offer open access to riders unless timber felling or haulage means that for safety reasons they are closed. As for walking, its tempting to say find a forest and get stuck in. But by way of a few sample ideas: Penninghame Forest, part of the GFP, sits to the west of Newton Stewart, and has a nice easy pipe-opener of a walk around the pond. Rather more taxing are the trails in Glentrool Forest above the village of Glentrool, again part of the GFP: here the properly booted and clad can think about walking up Merrick, at 2766 feet the highest mountain in the south of Scotland.
A few miles east with Gatehouse of Fleet , Castle Douglas and Laurieston at its edges is Laurieston Forest: leave your vehicle in the car park and set out on one of the many marked trails.
For a change of air get along to Dalbeattie Forest which begins at the edge of that town and reaches south towards the sea at Rockcliffe and Kippford on the Solway coast . This is one of the 7stanes beloved of mountain bikers, but often offers gentler pursuits like guided wildlife walks. Another Solway Coast Forest is that of Mabie , sitting between New Abbey and Dumfries . This one may be of particular interest to families with younger kids, as it has a short marked trail and by way of a bribe an adventure playground.
And talking of wildlife, for the chance to see something sadly rare head to the vast  10000 hectares - Forest of Ae above Dumfries and Lochmaben, where with luck you may see red squirrels, or if you are light-footed while close to the Water of Ae one of its many otters. Again this is one of the 7stanes, so its not all peace and quiet!
At the western edge of Dumfries and Galloway there are two more forests to explore, that of Castle Oer above Lockerbie and Langholm , and Eskdalemuir near the village of the same name. Something different to try in Castle Oer Forest is a visit to the earthwork remains of what is thought to be a Dark Age fortification at Deils Jingle. And Eskdalemuir Forest is one of the places hereabouts where you can learn to stalk deer.
We must not forget the promise made at the start of good astronomy: since 2009 the Galloway Forest Park has enjoyed Dark Sky Park status  in simple terms there is minimal light pollution and on clear nights youll get to see loads of stars. A simple pleasure, but magical even without a telescope or binoculars, but if you have such devices it would be silly not to pack them.
We have a huge variety of hotels , B&Bs , cottages and campsites for you to find accommodation to suit your needs for a break in the area. Dumfries and Galloway is a great place to stay with some lovely old market towns, fishing villages along the Solway Coast cut with scenic bays, and hamlets nestling in the hills. And for foodies we must mention the excellence of its artisan smokeries, something literally to sniff out if you love proper smoked salmon and delicacies liked smoked pollock, venison and duck.