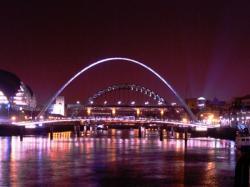 Newcastle  a Science and Engineering Break

Most articles about breaks in Newcastle are likely to focus on the citys party-animal side, and if thats your reason for going there have fun and take headache pills in your luggage. But there are other sides of the Geordie capital worth exploring, not least the districts place in our engineering and industrial history .
History may be an ill-chosen word, as there is much of contemporary interest in Newcastle. Perhaps the best way to start building a feel for the place in that light is by taking in the many bridges across the River Tyne between Newcastle and Gateshead  and its free to walk along the atmospheric and much redeveloped Quayside too.
The High Level Bridge was opened in 1849, carrying both road and rail routes across the river. It was designed by local lad made extraordinarily good George Stephenson , and is an elegant piece of engineering that has stood the test of time. The Hydraulic Swing Bridge completed in 1876 was an equally effective piece of engineering imagination. It is the iconic Tyne Bridge, though, whose bow shape symbolises for many this city, the structure finished in 1928. Maybe that view will change in the future, as the fascinating and beautiful Gateshead Millennium Bridge becomes better known  its nickname of the winking-eye captures the way its seems to operate.
George Stephenson mentioned in that paen to bridge-building is one of two great local figures from the 19th century who merits special note here. His birthplace in Wylam , a few miles west of Newcastle, is tended by the National Trust and helps build a picture of just how magnificent his personal achievement was, rising from the humblest roots. There is a small railway museum in that town too, though a far larger one can be visited in North Shields . It seems somehow apposite to take the Metro to visit the Stephenson Railway Museum there, where among a multitude of train stuff youll find Stephensons Billy, forerunner to The Rocket. Another bridge not mentioned in the previous list by the way is the Metro Bridge, carrying that excellent light railway over the river, the tracks disappearing into tunnels either side of the gorge.
If you venture to Wylam you will pass through or close to Newburn, where you will find the Newburn Hall Motor Museum , which houses a display of old cars, trucks and motorcycles.
Pride of place as regards museums in this area, part funded by Tyne and Wear Council, goes to the North England Open Air Museum at Beamish , five or six miles southwest of Gateshead in the triangle whose points are Stanley , Chester-le-Street , and Birtley . There are working trams, replica locomotives pulling open wagons in which you can ride, a wooden Wagonway, and a host of other exhibits that bring history to life, not least a reconstructed pitworks and a drift mine where if you fancy you can do an underground tour. To get to this museum if driving along the A1 from Newcastle you will pass a more modern engineering  and artistic  feat, the Angel of the North . Much derided in the planning stage it is now recognized as a structure as spiritually important to the area as the Tyne Bridge, and few would doubt its beauty now.
The second eminent Victorian of Newcastle origin who must be cited here is Lord Armstrong , solicitor turned engineering innovator of genius. Like Stephenson he profited by his work, his home at Cragside near Cartington a bit of a trek up the A1 and A697, but worth it. This was the first house in the world illuminated by hydro-electricity; and had a hydraulic lift among other devices. Again the house is managed by the National Trust.
If you prefer to limit mileage and remain in Newcastle , there are several museums and centres of interest to the engineering-minded that will keep you  and any accompanying children  amused. For example the planetarium at The Great North Museum at Barras Bridge in the city; more focussed on matters motive and scientific is Discovery , where you can visit the Turbinia, once the worlds fastest vessel. Within the centre is The Tyneside Challenge, displaying things like a model of one of Armstrongs breach-loading guns; there is also the interactivity-rich Science Maze.
A more contemporary place is to be found in the Life Centre , again with planetarium but with much of its exhibition space taken up with matters medical, and that offers frequent science demonstrations expanding on topics raised elsewhere in the building. The Life Centre is at Times Square, near Newcastle Railway Station.
Naturally there is nothing  other than perhaps childcare - to stop you having a few drinks while you are in the city, after all youll have paid your cultural dues in full if you only follow half our suggestions. Its a good place for restaurants too. Information Britain has accommodation to suit all requirements and pockets all over the city of Newcastle itself and spread over surrounding towns, villages and the countryside.