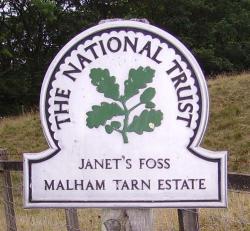 The National Trust is a registered charity and, contrary to popular belief, it is completely independent of Government. The Trust relies for income solely on membership fees, donations and legacies, as well as revenue raised from commercial operations. The National Trust is governed by a 12-strong Board of Trustees, appointed and overseen by a Council which comprises 26 people. This council is itself elected by the members of the Trust, and another 26 people appointed by other organisations whose work is related to that of the Trust. These
include The Soil Association, the Royal Horticultural Society, and the Council for British Archaeology.

The National Trust was founded in 1895 by three Victorian philanthropists - Miss Octavia Hill , Sir Robert Hunter and Canon Hardwicke Rawnsley . The three were concerned about the impact of uncontrolled development and industrialisation in their time. They founded the Trust to act as a guardian for the nation by a process of acquisition and protection of threatened coastline, countryside and buildings. In the early days of the Trust their activities were concentrated mainly with protecting open spaces and a variety of threatened buildings. The first property to come under their control was in Sussex . The trust bought the 14th century Alfriston Clergy House in 1896 for £10. The first foray into nature reserves was Wicken Fen and their debut archaeological monument was White Barrow.

To say the National Trust has become synonymous with our history, traditions and the fabric of our towns, villages and open spaces would be an understatement. The National Trust brand has been enormously successful and most people over working age will know of them and their works. The challenge for the Trust, going into the future, is to see if they can maintain this profile in a rapidly changing world where games consoles have replaced country walks for many people. The Trusts reliance on charitable giving also presents a problem they will have to wrestle with during times of economic hardship.