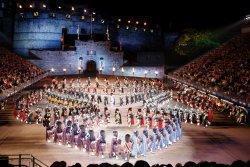 
Made Royal in 2010 to celebrate its 60th anniversary, the spectacular military show that takes place over three weeks of every August against the backdrop of Edinburghs ancient castle has become a national institution. More than that, it is truly international thanks to the performers from about 40 countries who have graced it over the years and to its audience members drawn from around the world.
The Tattoo is a decidedly different part of the Edinburgh Festival. Yet as with the thousands of comedians, actors, musicians and street artists who throng Auld Reekie during that great gathering the Tattoo first and foremost entertains. It is carefully choreographed; with one of the worlds great set designs behind it; includes fireworks; and is painstakingly rehearsed.
If the Tattoo is a national institution it is of course Scottish, the bagpipes being the dominant sound of the shows; icons like Robert the Bruce and William Wallace trotted out to stir up patriotic fervour; and enough tartan on display to keep several mills running year round. Scotland in this case embraces the sons of that land who emigrated during the Scottish Diaspora: to New Zealand, Australia, Canada, the USA, South Africa and more besides. But the Scots are famed as warm-hearted hosts, so less-likely guest participants have included Swiss, Dutch, and Fijians.
The heart of the event is in the right place too, benefitting charities; and the audiences heart-strings  not just on the Esplanade but in living rooms around the globe - are certainly played by the organisers: the Last Post; a lament played by a lone piper, and a march down the Royal Mile to conclude. And if anyone wonders about its part in the entertainment-fest that is Edinburgh in August: since the Millennium every ticket has been sold long before the event.