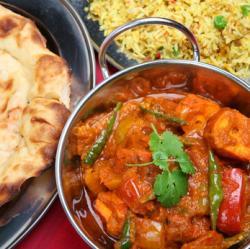 From its chalk cliffs to its heather covered extremes, Great Britain is united in its love of the curry. In garam massala we trust, with garish sauces and fragrant plates of basmati rice Britain is just enraptured with the curry house. So far removed from our indigenous cuisine, Indian curries have truly tapped into our multicultural selves, and in the curry houses across the length and breadth of the country we have spent our Friday nights in glorious union with plates of bhuna, byriani and that rouge perennial, the rogan josh. Curry culture stuck its fork in our mealtimes and commanded centre stage: come on, chicken tikka massala is now our national dish! How did that happen? Gently spiced subjugation, thats how. Our dedication to dinnertime wayfaring to the Indian Subcontinent has become an immovable buttress in our diet, just as the puffin needs sand-eels and a safe place to nest, we Brits have become reliant on Indian cuisine to fill our bellies. And what a joyously colourful dependency it is. The magnetic pull of the curry houses, the smell of the tandoor pulling the famished through the door; since springing up in Birmingham and spreading through the country, the curry house has become the first port of call, the watering hole of choice of the stag and graduation party alike. A love of lager collided with the irresistible love of chillies, spices, naan breads and poppadums. It was unavoidable. For those indifferent to the South Indians chilli dependency and North Indias rich and intoxicating curries, take a stroll down the neon glow of Manchester s Curry Mile in the Rusholme area of the city; its like Vegas without the gambling and behind every door lies a winner. The curry first stuck its flag in Britains culinary milieu in the days of the British Raj and colonial India. Those working in India would take spices, ginger and chillies home, recipes were adapted for sensitive tastebuds, and it is in this adaption that Indian cuisine has evolved in British kitchens to create a hybrid cuisine. Though Indian food in Britain has been modified for the egg-and-chips brigade, there are still authentic dishes being served up to those who like their dosas huge and can tell the difference between fresh spices and curry paste. The thing is, the majority of our curries are the more vulgar efforts. The kormas ordered by the feint hearted are never like those in North India, whose mealtimes were influenced by the Mughal Empire. And then theres the heat. The vindaloo was inspired by Portuguese colonists in Goa, and now is a badge of honour for generously bellied men to devour after a night on the beer. Theres a macho element to the heat of a curry, one which blue collar Britain cant get enough of and our Indian community must find hilarious. BBC comedy Goodness Gracious Me captured the spirit with its sketch of an Indian family going for an English and asking, Whats the blandest thing on the menu? As the curry house grew in popularity through the 1970s and became a staple of the dining scene in the 80s, the British palate was still retreating from the more pungent and aromatic Indian dishes. It was only natural that those curries customised for the Brits would prove to the most popular. Chicken tikka massala cant be bought in Mumbai, it was knocked up with chicken tikka and a faintly spiced sauce of tomatoes and yoghurt, catering for a nation weaned on Heinz Tomato soup it could not fail to be an enduring success. Much like the curry house.