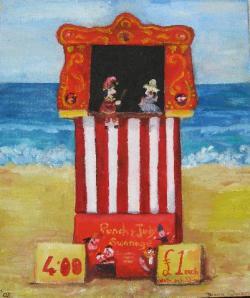 
How very British that one of our most loved institutions is a borrowing, in this case from Italy. Punch and Judy can trace its roots back to the Italian commedia dellarte, though the story as it has evolved contains plenty of elements also seen in traditional mummers plays , and it doesnt take much imagination to spot links with folk dances like the Morris and Rappers. The audience involvement too is reminiscent of Panto , children screaming warnings to Punch  its behind you!
Unlike most traditions, this one has a birthday: May 9 1662, when Pepys recorded seeing an Italian puppet play at Covent Garden , though this first known sighting here was probably an earlier marionette version rather than the glove-puppet show we now know.
Over the years fashion and taste have changed, quite dramatically so over the last few decades, which means the once traditional hanging scene is generally omitted; Punch doesnt tend to whack his baby with a stick, though may accidentally on purpose sit on the infant; and in some shows the once central theme of marital violence is toned down.
But some things dont change: the basic story  or basis for improvisation (the full version of commedia dellarte includes allimproviso  via improvisation) is Punch asked to look after his baby by wife Judy, his failings in that regard, and a stream of events thereafter involving much hitting and being hit with sticks, danger from a crocodile, and a foolish policeman. And all, much to the chagrin of the terminally correct, to the vocal delight of children.
For years the tradition clung on at seaside booths from Brighton to Blackpool , Lowestoft to Llandudno , but of late a return to favour at parties and institutional celebrations has been noted, which is good for the Professors who perform the (largely) one-man-shows. Thats the way to do it. Gratuitous but de rigueur.