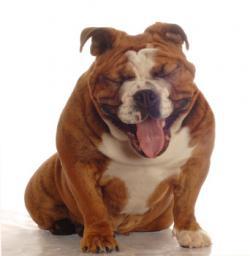 
The bulldog is not a national institution because of our famous soft spot for animals, but rather for the perceived similarities between its nature and certain characteristics that we like to think of as British. So fond of the analogy are we that one of our favourite playground games is named for the creature; and Webley chose the name to promote its popular short-barrelled revolver.
An unwillingness to let go once it gets its teeth into something is the first such trait that springs to mind, symbolising unrelenting determination. Loyalty too. But thats perhaps balanced by the fact that very hot weather kills them as they are not smart enough to get in the shade; and they dont have great teeth. Not inaccurate, but less flattering.
The bulldog was originally bred for fighting, another perhaps unattractive link between us and the beast; but these days the viciousness has been eliminated  mainly.
Another link with the breed is that to Britons all new-born babies look like Winston Churchill , and Churchill in his later years looked just like a bulldog (hence the insurance ads), so all Brits at one time look like bulldogs. And some not just at one time: W.H. Auden certainly in his late middle age had definite bulldog facial qualities  folds and jowls; and it was not merely for their undoubted acting talents that Timothy West and Robert Hardy have played our greatest Prime Minister in his finest hour.